The good news about this game is that Tom Brady doesn't appear to be 100% recovered from the knee injury he suffered in week 1 last season.  The bad news is that it doesn't really matter.  Cortland Finnegan isn't going to play tomorrow which means the Titans secondary will once again be running out two rookies and a practice squad player.  Michael Griffin and Chris Hope have been pretty much invisible this season.  If the Titans are going to have any shot at winning this game those two are going to need to have the game of their lives.

Another piece of good news is that the Patriots aren't a very good running team (of course neither were the Colts).  The Pats come in ranked 20th in the league rushing.  The Titans should be able to control the attack of Sammy Morris and Laurence Maroney with just their front four leaving the back seven to try and figure out how to stop an opposing QB from throwing for 300 yards.  *side note- The only quarterback not to throw for 300+ against the Titans this season was Mark Sanchez.  How sad is that?

On offense we will talk again about how this team should re-discover their smash mouth mentality.  We have been saying that should be the case for weeks now, and they have still yet to take a shot at doing.  I can't help but think that if Jeff Fisher and/or Mike Heimerdinger read this blog every day the Titans would be at least 3-2.  In all seriousness though the best defense the 2009 Titans can play is on the sideline watching the offense eat clock.  That is especially more important against a quarterback like Brady.

New England plays pretty good pass defense allowing just 212 yards per game.  That makes it even more important for the Titans to get the rushing game on track.  It would also be nice to see Kenny Britt and Jared Cook on the field early and often.  We heard about all of these match-up problems that Cook can create.  Why not prove that to us since it is week 6 now and we are 0-5.  Just sayin.... 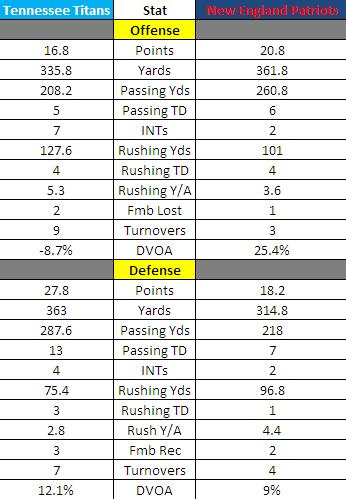 It is really mind boggling to look at those numbers the Titans are giving up on defense.

I wish I could have a more positive outlook heading into this game, but it is tough to see a place where the Titans have the advantage.  Here's to hoping they can force a couple of turnovers and get some easy scoring chances.