Peyton Manning: The Bane of My Existence

Share All sharing options for: Peyton Manning: The Bane of My Existence

Peyton Manning is my least favorite player in the NFL.  I told gramsey that the other day, and he scoffed at me.  The Hater can scoff all he wants, but that is a true statement.  It dates all the way back to his days at the University of Tennessee.  Thinking about how much I hated him made me curious as to how he has done against the Titans in his NFL career.  Follow me through the jump to see the answer. 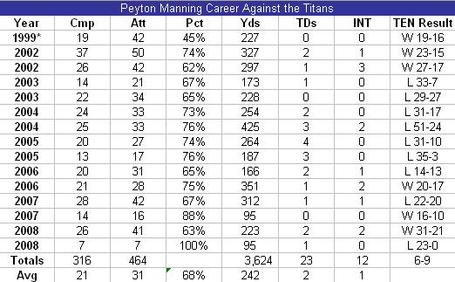 Honestly, I was expecting those numbers to be a little higher.  Now you do have the two throw away games from 2007 and 2008 in there, but you also have the 2004 and 2005 games in there when the Titans were one of the five worst teams in the NFL.

What does this mean?  Nothing, but I was curious so I decided to look it up.