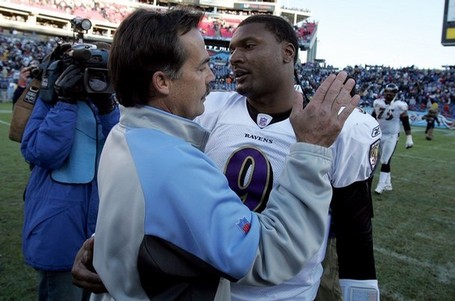 (NOTE: The following is based on the idea that this story is true and nothing changes between now and tonight.)

Steve McNair has all the reason and right to hold a grudge against Floyd Reese and Bud Adams.  They created the situation with his contract (by putting off bonuses until it was an payable number) and they botched the end of that relationship about as badly as possible.  Titans *fans*, however, were heartbroken when he was told to leave by the organization.  We knew he was probably done, but we'd have all loved for him to stay one more year and help VY while remaining the starter. But we couldn't control that, and we all handled the defection to the Ravens with notable kindness considering it WAS THE RAVENS.

Now, if Steve wants to get back at the Titans' bean counters then fine.  Take a front office job or do something with the Ravens organization in Baltimore that will get the message across.  He's earned the right to break loyalty with the organization.

It's a wholly different message to come to Nashville, on the eve of the this town's biggest game in 6 years and hold a pep rally -  basically at the door-step of our stadium - for this franchise's and this city’s most hated rival.

And lets clear this up: hiding behind the charity angle is weak.  Are you telling me couldn't go co-host or appear at the 104.5 the Zone's event and raise money for the Charles Davis foundation, which does mountains of good work with Nashville's struggling inner city youth?  Are you telling me Titans fans wouldn't bring in at least three-fold the amount of money and people if McNair did a rally anywhere at any time in this city?!

Steve McNair was the greatest Titan we've ever had.  He was drafted by this organization.  He went to the Super Bowl here.  He won an MVP here.  He was pivotal in our post-season success and in getting this town on-board when they arrived.  That will never change, and I'm not making any drastic proclamation based on this fiasco.

What may change is how I view his connection with Titans fans.  This one hurts, and if he doesn't understand that then he may not understand us.

**Update**: according to several sources McNair did not attend the party and really didn't know it was supposed to be a pro-Ravens pep rally.  This is a huge relief and a very good news headed into gameday!