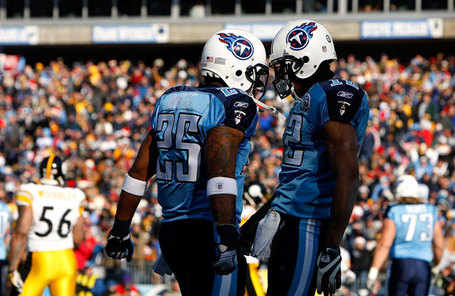 AND NOW A LESSON IN NOT LISTENING TO SLIMY AGENTS:  I. Am. Not. Happy. About. This.  Steve McNair should find better ways to raise money for this amazing charity (I'm a big fan of the Ronald McDonald house, and their involvement is the only thing keeping me from going ballistic), because 15 people dressed in gaudy purple and complaining about the quality of the crab cakes aren't going to make much o f a difference.  You'd make 10 times as much with a Titans rally, so cut the crap.

How in the world did I miss this: Snoop Dogg was at the Titans-Steelers game rocking the two-toned blue at LP Field!

This saturday only, on the muddy banks of the Cumberland, it's Harris vs. Ngata.  And remember: you'll pay for the whole seat, BUT YOU'LL ONLY NEED THE EDGE!

Leroy Harris, welcome to the big leagues... I know PFW is saying you're going to compete for Amano's spot at guard again this coming off-season (unless you're needed at center, hint, hint), so Saturday is a darn good chance to show the world what you can do.

Kerry Collins is drawing inspiration from the autobiography of Texas Rangers star Josh Hamilton, but if he takes this team to the hilt you can sure expect Kerry to get a book deal of his own.  Few players have seen the heights and the depths Kerry has endured over his long NFL career.  Now lets just make sure the last chapter in that book is a happy one!

Peter Schrager at Foxsports.com breaks down the list on intangibles for each team in the playoffs, and he seems to understand this team better than most national guys... it's almost like he pays attention of something crazy like that.

Craig Hentrich is really pressing to get his punting mechanics back to form, and I hope he's got the kinks worked out because we're obviously going to need him to flip the field a few times for us... especially early.

The Sporting News has extensive coverage and breakdowns of the Titans-Ravens match-up.

Another country music local takes a stab at a Titans anthem.  It's meh, but if others like it I could deal.

This better just be lip service from LenDale White...