Share All sharing options for: Tennessee Titans Morning Links: Keep Ray Ray Out Of The Limelight Club As Well Edition 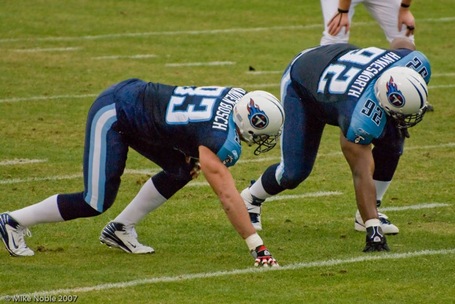 Esquire.com writer Peter Schrager delivers a great column on the Titans-Ravens as the rivalry everyone is missing out on.  Read the whole thing for a special comment  on the a favorite moment in this rivalry from yours truly.

Loyal reader/commenter Superhorn posted this article on Vince Young in the comments for yesterday's linkage, but I wanted to put it up top because it's a very good read.  Norm Chow takes up for VY even though he's in an even better position now to throw him under the bus if he wanted to...

Paul Kuharsky has a bevy of good Titans stories today, and here's a partial run-down:  Boom King is raring to go, but Dave Ball will be out Saturday; Bo Scaife needs to re-emege from the slumber he's been in since early November and here's video of Haynesworth talking about 'coming out of hibernation' for the game Saturday.

Titans center Mawae is snapping left-handed in practice, but it still isn't looking good for Saturday.

Cortland Finnegan put himself on the NFL map this season, earning his first Pro Bowl trip with a style of play noticed by players, coaches, officials and even the league office.

The Titans cornerback views that as a compliment, no matter the reason.

Even if it means he's become a marked man for receivers wanting to beat him (in more ways than one), referees having to penalize him (they flagged him five times for roughness) or the NFL imposing fines against him ($35,000 in December alone)...

"The fines? Listen, bro, I'm not mad about any of that. It all goes to charities anyway.''

He has to back-off of the 15-yarders, but you can't teach that level of intensity.  He was just born with that fire.  It's why he never takes a play off and wide receivers always want to brawl with him when they should be concentrating on their routes.

AND NOW AN EXERCISE IN READING THE WHOLE STORY BEFORE FREAKING OUT:  About the only thing Steve McNair could do to ruin his legendary standing with most Titans fans is hold a pep-rally for the Ravens this weekend, and that's exactly what a Baltimore radio station is saying is going to happen Saturday at the Limelight club just a few blocks form LP Field. Keep in mind though that radio stations are known to fudge these kinds of things, and McNair's agent and manager deny that he would ever even consider such a thing:

"There's not a guy more loyal to the Titans than Steve McNair,'' Raymond White said of the former Titans quarterback."He has given his body, blood and bones to the Titans. He has given more body parts than anybody for the Titans. Steve isn't doing this. He is never going to host a pep rally for the opposing team. He is 100 percent Titans."

Due to rescheduling its bye week from what was supposed to be Nov. 9 to Sept. 14, Baltimore now has played a whopping 17 straight weeks without a bye. It has taken its toll on the Ravens, too. They are a tired team.

Now, after a trying season in which the Ravens have been up to the challenge, they will have to play on a short week. Baltimore beat Miami in an AFC Wild Card Game. They now will be forced to travel to Tennessee to play a day earlier, Saturday. It is not going to be easy.