Share All sharing options for: Tennessee Titans Morning Links: The Elephant Freak And An Indecent Proposal To Trade VY Edition 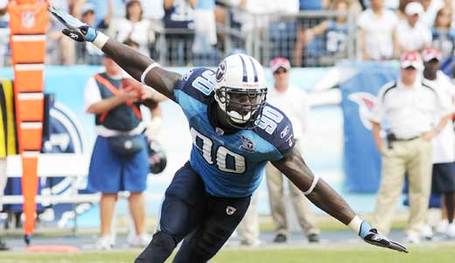 From elsewhere in the SBNation: should we trade Vince to the Texans for a 4th round pick?  I love a good laugh in the morning, don't you?

Paul Kuharsky nails it: if we could have one guy back from the 2004/2005 Salary cap purge it would be Derrick Mason.  Alas, now he's playing for the hated Ravens and was acting like a [insert archaic feminine hygiene product paired with a narrow, oar-powered boat] last time we saw him.

If The Ravens come in our house and try to run their version of the 'Wildcat' formation they're going to get crushed.  Our front 4, especially with Haynesworth collapsing the middle, get too much penetration to give up much there and the Ravens don't have the speed at RB to get outside and break contain on us.

No matter how much Fisher wants to tell everyone that the history between the TItans and Ravens is old news, it's bunk.  I'm just glad there are fiery leaders like Jevon Kearse and Keith Bulluck to remind us of that:

The defensive linemen of the Tennessee Titans have photos of animals taped on the nameplates of their lockers, sort of as a descriptive depiction of their character or a particular look.

Perhaps defensive end Jevon Kearse should have an elephant as his designated animal, because Kearse hasn’t forgotten what happened to the Titans courtesy of the Baltimore Ravens in the 2000 playoffs.

"It definitely was stolen, because those guys went ahead and won the Super Bowl that year," Kearse said of the Ravens’ 24-10 victory over the top-seeded Titans that day...  You could look at it as payback. I’m not going to lie. In the back of my mind, I’m looking at it as payback, because so many things that we had going that year, and we did have the best defense that year," he said.

Big ups to prolific contributor/haterade baron gramsey712 for pointing us towards the story about Kevin Mawae: the Titans center was on SIRIUS radio with John Riggins, and he didn't sound like a man who really plans on playing Sunday:

Riggins: "Will you be there this weekend?"

Mawae: "No, I'm not going to play this week. It's still questionable. We're day-to-day and hopefully things progress to where I'll be able to play next week. But again, we're day-to-day right now."

Schein: "So you're not going to play this week against Baltimore?"

Mawae: "Don't know. We're preparing like I'm not. Leroy Harris is taking the snaps right now and my job is just to get healthy and get stronger. But the final decision has not been made yet."

Then the AP asked Mawae about it and he backtracked.  So, feel free to believe whichever account helps you through the day.

Paul Kuharsky pulls some great stats on how opposing kickers have struggled mightily at LP Field, where their hitting FGs at a rate about 20 percent lower than the league average.  It's definitely a good read.