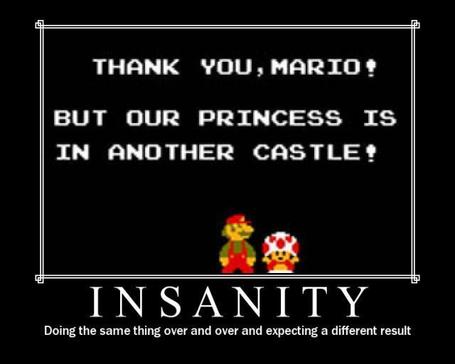 Todd McShay has his first full mock draft up (Insider subscription required) now that the 2009 Draft order is established, and he joins many other Titans fans in failing the definition of insanity: doing the same thing, over and over again, but expecting different results... just like Mario up there.

Who does Todd have us taking?

Let me go ahead and say this for the first time of the draft season: We're not getting a 1st round wide receiver.  It just won't happen, and in my opinion, shouldn't happen.  WR is the least important position on the field in Fisher's system, and it's a system that's worked pretty well over the years.  A great 1st round WR won't help us win nearly as many games as a better talent and depth at defensive lineman CB, LB, interior offensive lineman will.

We need new receivers, obviously, but that big of an investment is a bad idea.

Maybe I'll be proven wrong, but I'll go on record as hoping we don't go WR in the first round.  Defensive talent at any position would be a better investment for the best team in the NFL.  Every year guys unpredictably regress or get injured and depth is the key to making sure we're the best defense in the NFL for years to come.  And being the best defense is the key to keeping a stranglehold on this division and this conference.

I expect this discussion will be on going, and tempers may even flair over it.  The truth will remain the same though, it ain't happening.