Share All sharing options for: Tennessee Titans Morning Links: Fathers Of The Gods > A Poem Edition 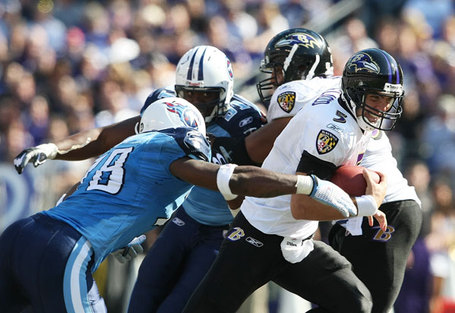 Our first playoff game this year is against a team named after a poem.  I don't think we could ask for a better match-up seeing as how the only teams that have really given us fits were big time, balanced offenses.  Each time we've lined up against a great defense we've walked away victorious.

ESPN's Paul Kuharsky has a first look at the Titans-Ravens match-up, including a wise word of warning for those who are getting a little too excited about Sunday's results which happened while our guys had earned the right to worry more about Hot Pockets than pocket passing for a day:

And while Baltimore's vaunted defense is likely going to get more attention heading into the game -- in large part because of what it did against the Dolphins while the Titans rested at home -- Tennessee was second in NFL scoring defense this season and Baltimore was third. Also, the Titans have 31 takeaways to Baltimore's league-leading 34.

Kerry Collins may be in for a tough day, but so should be Joe Flacco.

Last week was pretty relaxing for the Titans players, but this week better be the most smash-mouth practices they've seen all year... my biggest fear is that, coming off of essentially 3 weeks off, our guys won't be ready for how physical Baltimore will be from the opening kickoff.  We have to trust Fisher to get them in the right head space for this grudge match.

The Browns canceled their interview with Jim Schwartz this past weekend, and Eric Mangini became the public front-runner.  However, the Lions are still sniffing around for anyone who may be desperate enough or dumb enough to take that job.

Titans center Kevin Mawae will be a big question mark to play Sunday, and though LeRoy Harris has played very well the past few weeks for the injured vet, something tells me Mawae would be out on that field with both arms chopped off and a pirate patch on if that's what it took.

If you're anything like me, you also threw-up a little in your mouth during the 'Peyton has long hair' moment of Saturday Night's broadcast.  Such a rebel he is.  That do will look pretty rockin' on the golf course though...

Jeff Fisher finished in 3rd place in Coach of the Year voting, which was won by Atlanta's Mike Smith.