Tennessee Titans Morning Links: A Round Of Haterade On The House Edition

Share All sharing options for: Tennessee Titans Morning Links: A Round Of Haterade On The House Edition 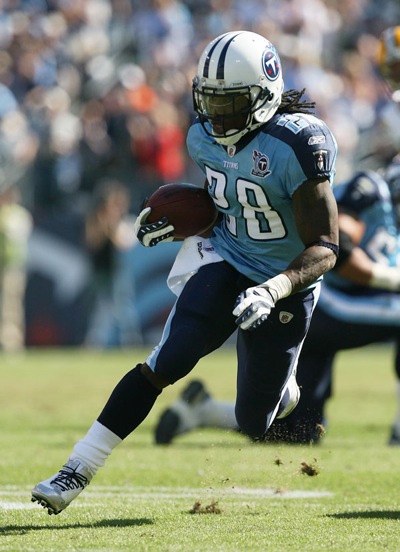 Crazy Legs probably hates the Ravens more than the city of Cleveland and the 2000 Titans team combined: the dirty hit that took him out of the playoffs will also keep him out of his first Pro Bowl.  If I was Crazy Legs I'd spend all of season drinking hella Haterade and praying we get them again in the post-season.  Losing out on that experience on a fluke injury is one thing, but having it taken from you like that hurts so much more.

Albert and his agent are starting to play hard ball with their new contract.  From the quotes we get here, it sounds like guaranteed money - more so than the total value of the contract - will be the key to keeping Haynesworth a Titan for years to come.  Oh yeah, and don't expect a hometown discount either.

In Terry McCormick's accounting of Albert's situation, the big man is sounding frustrated with the Titans organization's slow and methodical approach to these negotiations.

While most players avoid the Super Bowl like the plague unless they've won one, Kevin Mawae says it can be a very valuable experience for younger players and will change the way they look at football's greatest pageant.

Look, I love PFW's coverage and their willingness to run blind items that give nice tidbits from behind the scenes that you won't get anywhere else, but this is seriously the worst mock draft I've seen so far this year and their pick for us is just craziness:

The Titans are in position to think about the future, and with solid receivers to be found in coming rounds, they could take a gamble on the only other bona fide passing prospect in the draft with Kerry Collins hitting free agency and not guaranteed to be back.

The Sporting News has a great run of pages covering this weekend's Super Bowl.

NFL Players Association President Kevin Mawae stated publicly yesterday that there's no reason to think there will be a lockout when the Collective Bargaining Agreement comes up for renewal/renegotiating in 2010.  The NFLPA also expectes to elect a replacement for recently deceased Gene Upshaw later in the year.  Nobody really wants to admit it, but a lockout is also incredibly less likely to happen if the economy hasn't fully rebounded by that point either.

And finally, for those who haven't been following the hilarity of this year's fake celebrity Super Bowl picks at Kissing Suzy Kolber, at least take a minute to check-out the pick made by Butters Scotch/Professor Chaos.  I swear Butters may be in the top 5 of all-time greatest TV characters ever.