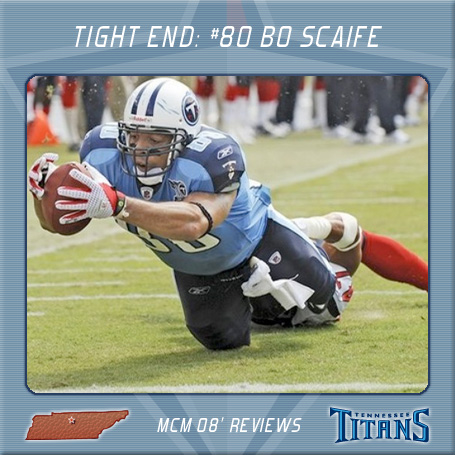 When the Titans signed Alge Crumpler there were some questions about how this would effect Bo Scaife's production.  All Bo did was respond with career highs in receptions, yards and first downs to go along with his 2 touchdowns.  In his 4th year in the NFL, Bo Scaife has become a certified threat and could be on the cusp of a break-out season.  His season's highlights included 6 catch 105 yard performance in week 1 against Jacksonville and 10 catches for 78 yards and a touchdown against the Bears.

However, in the final 8 weeks of the season Bo managed only 16 catches for 139 yards and 0 touchdowns.  He had darn near beat that meager production in the previous 2 weeks alone.

Accordingly, the only complaint most Titans fans would have about Bo is that he can disappear for stretches, but then again in this offense and with our QBs every pass catcher disappears for stretches.  Bo is heading into unrestricted free agency, and he looks like the prototype of the type of player teams overpay for every year.  The Titans won't stretch their pocket book to keep him, so don't hold your breath that Bo is back.  If he does leave though, it'll be a tough loss for us... especially because HE DIDN'T LOSE A SINGLE FUMBLE ALL YEAR... unlike some TEs we know.