Tennessee Titans Morning Links: The Upside To Being Ignored Edition

Share All sharing options for: Tennessee Titans Morning Links: The Upside To Being Ignored Edition 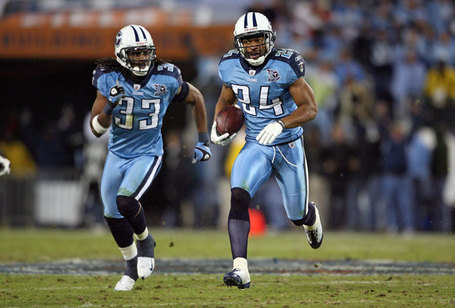 Congrats to Michael Griffin on being picked to replace Ed Reed in the Pro Bowl!  He's easily the most deserving alternate who will line-up in Honalulu for the last time (the Pro Bowl will be in the Super Bowl hosting city of Miami next year), and it should be the first in a long line of Pro Bowl appearances for one of the leagues best young safeties.

Paul Kuharsky asks who is the best assistant coach on the Titans staff.  There are a slew of great options, but I think you'd be crazy not to pick Jim Washburn.  The job he does year in and year out with a line that always features a bevy of street free agents is remarkable.  We're honestly luckily we're so often ignored by the national media because Wash would be a red hot commodity if people were aware of how good he is.

PFW reports that Jim Schwartz may be very interested in signing away Chris Carr from the Titans... I'm just hoping they stay away from big Albert.

It looks like Kevin Mawae's injury was worse than we thought, and it may be a serious concern moving forward since it's a re-occurance of a previous injury:

• Center Kevin Mawae’s elbow injury was much more serious than the Titans let on during the season. Mawae will have surgery to repair a partially torn tendon in his elbow. He had a completely torn tendon before joining the Titans in 2006 that required surgery and rehab.

"If this had happened in Week 5, I would have gone on IR, but I was going to try to return for the Super Bowl," Mawae said of the injury suffered Dec. 21 against Pittsburgh. Mawae, 37, has never played in a Super Bowl, and if the Titans had advanced that far, coach Jeff Fisher was trying to keep from ending Mawae’s season by allowing him to play at least one play in the game.

"Our hope with Kevin, had we been successful and continued winning, was to keep Kevin up and keep him on the active roster, and I committed to Kevin that if it was at all possible to keep him up, so he would have the opportunity to play at least one play in the Super Bowl," Fisher said.

Dwight Dixon, the man alleging he was shot Marvin Harrison, is expected in court today to face charges of making false statements during the investigation

The draft buzz at the Super Bowl is centering around the Lions, and apparently most people expect them to take Matthew Stafford with the first pick.  I still contend they'd be better with a lineman there and sticking with Culpepper for another year.