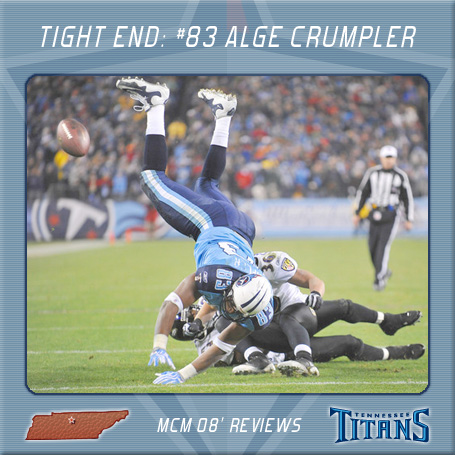 Obviosly the only thing we can remember right now from Alge's season is when he went Rosencopter in the playoff game and coughed up the ball.  Honestly, his entire season wasn't much better than that.  Some people are quick to point that he was an effective run blocker.  I have no idea if that is true or not, but the Titans didn't give him $5.25 million to be a run blocker.

It was a red flag to me that no one else offered him money in that neighborhood last offseason.  He obviously isn't the player he was before he hurt his knee.  All we heard during camp was how good he looked and that he was the cure to the redzone problems, but he never proved that when it mattered.

As to whether or not the Titans bring him back for 2009, it is impossible to say at this point.  A lot of that depends on what happens with Bo Scaife.  If they lose Scaife, they will probably bring him back because his cap number isn't unmanagable.  (Something tells me they don't have a lot of confidence in Craig "Is the back of the endzone out of bounds?" Stevens)  If they re-sign Scaife, they will probably let Alge go and try to get someone that can make some plays for cheaper in the draft.