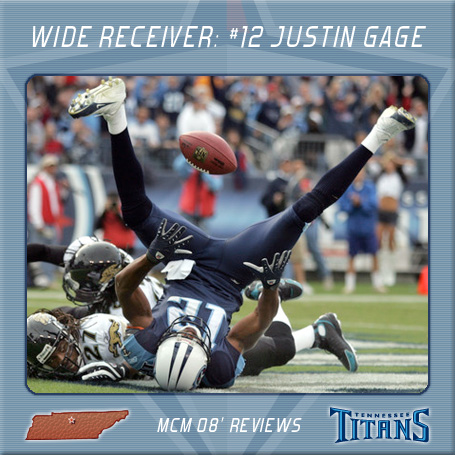 What does it say about your team when the far-and-away best wide receiver only logs 34 catches, 651 yards with 6 touchdowns and was only owned in 36.8% of ESPN's fantasy leagues?  It means you better have some studly tight ends and a great running game.

Gage is the only receiver on this team who has a guaranteed spot on the roster next year.  We shouldn't overlook the fact that his 19.1 yard per catch average was good for third in the NFL. What he's done as a Titan is no small feat considering we pulled him off the scrap heap after Chicago cut him in midseason in 2006.

One thing you have to give Justin is that he saved the best for last: his 10 catch 135 yard performance - which accounted for almost half of our entire passing yardage - against Baltimore was borderline heroic.  He also ripped off 147 yards and 2 touchdowns on only 4 catches in the second Jacksonville game.  I think it's clear to most Titans fans that if we can get a consistent speed threat on the other side of the field Justin could blossom into a very good second option who excels in a possession role and gives either Kerry or Vince a big body to find on third down.