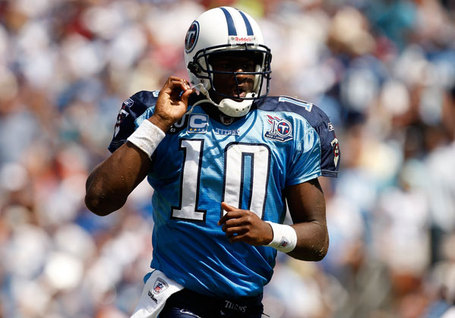 On the heels of the Kerry Collins news this weekend, Adam Schefter reports that VY's roster spot is safe and he'll still be seen as the team's long-term solution.  VY's contract is pretty toleable in 2009, but he'll have to be starting and starting well to make the pile of money he's due in 2010.

As was reported last night, the Titans and Haynesworth's agent have been chatting about the outline of a potential deal.  There's no way to really tell the progress of negotiations, and don't expect any reports of substance until after the Super Bowl as the Commissioner's office has historically put a gag on all major league news until after the league's greatest pageant is complete.

Everyone's former favorite practice squad WR Biren Ealy is gone: he'll be dropping preseason passes with the New Orleans Saints next year.  Ealy seemed like a good kid, and maybe a change of scenery will be just what he needs to breakthrough and make an active roster.

Titans defensive/quality control coach Matt Burke will be joining Jim Schwartz's staff in Detroit as the linebackers coach... so, good for him.

Pro Football Weekly comes through with a list of each team's top 3 needs:

WR — The Titans were widely expected to take a wide receiver at the top of the ’08 draft, but they took RB Chris Johnson instead. It’s hard to argue with that pick. However, it would be no surprise if this were the year the Titans looked hard at drafting a wideout in Round One.

DT — If Albert Haynesworth is re-signed, this is no longer a pressing need, considering the way rookie Jason Jones emerged at the end of the season.

QB — Whether the Titans add a passer probably comes down to whether they can re-sign Kerry Collins. If he departs, the Titans have to think about who will back up Vince Young.

If you want accuracy and objectivity in a Super Bowl prediction, KSK knows exactly who not to ask: Beaker!