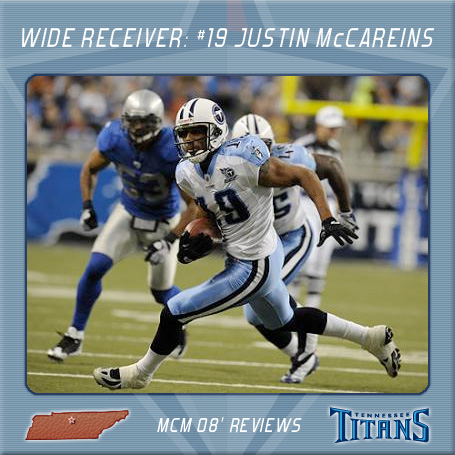 One word sums up the McCareins experiment: DISASTER.

For all of the good qualities Jeff Fisher has as a coach, he has one really bad one in his extreme loyalty to veteran players even when they are terrible.  That was the case this season with McCareins.  All he did was block the way for either Brandon Jones or Lavelle Hawkins to get on the field.  Now we have heard plenty about The Hawk not being able to catch on so you could make the argument he did not play his way onto the field, but Brandon Jones did everything he could have done to earn that shot.  He didn't get it because of Fisher's loyalty.

McCareins is a step slow and doesn't have very good hands.  Luckily the front office was smart enough to only sign McCareins to a one year deal so we don't have to worry about him wasting a roster spot in 2009.