The Scuttlebutt Around Town: It's Cecil

Share All sharing options for: The Scuttlebutt Around Town: It's Cecil 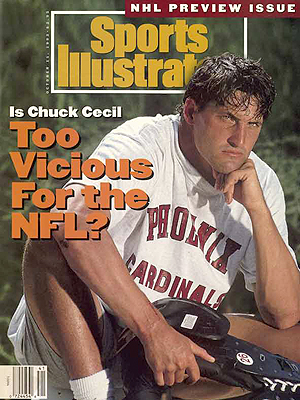 Building on his reports from this morning, Jim Wyatt is more convinced than ever that Chuck Cecil will be the Tennessee Titans next defensive coordinator:

There's a reason Titans Coach Jeff Fisher hasn't been scrambling since the departure of Jim Schwartz last week to Detroit.

It's because his next defensive coordinator is already in the building.

And from the sound I'm hearing, it appears there's a good chance it'll go to secondary coach Chuck Cecil.

As I wrote in an analysis that will run in Friday's paper, Fisher can't go wrong with either Cecil or linebackers coach Dave McGinnis.

Both are qualified, and well respected by the players.

McGinnis would bring more experience, Cecil perhaps a little more fire. At this point, I think that's what Fisher is looking for. Plus, McGinnis has made it known he's happy with his current position, so Fisher might be more willing to gamble.

Under that scenario, Fisher could then promote assistant secondary coach Marcus Robertson to take Cecil's spot.

I wouldn't count on our defense coming out flat very often.  Not with this cat waiting for them on the sideline.