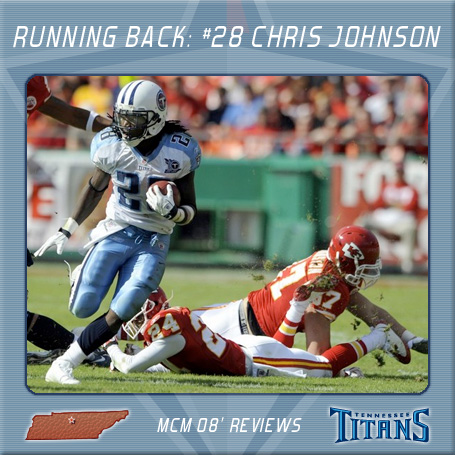 What is there to say about Chris Johnson's season really? A lot of us, myself included, were upset when the Titans took him with all of those receivers still on the board, but the front office proved they are smarter than we are. CJ changed this offense in a way that there is no way a receiver could have.

One of the big questions about him coming into the season was his durability. Speed guys like him typically get beat up in the NFL, especially in their rookie season, but Johnson stayed completely healthy, despite his 251 carries, until the dirty hit that the Ravens put on him in the playoff game.

The other big question was whether or not he would be able to run past guys in the NFL like he did at East Carolina. He answered that question early in the preseason and continued to answer it until he was taken out by Ray Ray and friends.

The Titans got a fantastic player, and a steal at #24 in the draft. Now their main objective should be to get some other weapons around him so that he doesn't have to touch the ball so many times because the shelf life for NFL running back is short. It gets even shorter when they touch the ball as many times as Crazy Legs did in 2008.