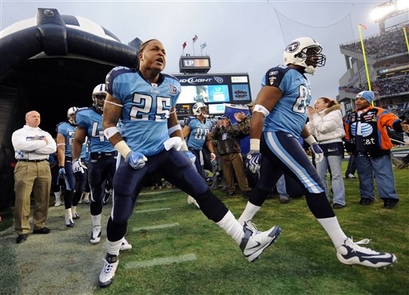 (I feel like I owe the big fella a pic in the links after torching him yesterday.)

It's mighty nice of at least one reporter who follows the Titans for a living to finally  give us some inside look at why Jeff Fisher still hasn't hired a defensive coordinator, despite overwhelming reports that the spot will be filled in-house.  Here's a hint at what might be the hold-up:

McGinnis has the most experience — 23 NFL seasons. But there are indications he might be content with his current position, as assistant head coach/linebackers coach with the franchise, and has relayed those thoughts to Fisher. That would open the door for Fisher to promote Cecil, who's spent the last eight seasons on the staff.

• Why he'd be a good fit: Has experience as a coordinator, having served as Arizona's D.C. from 1996-2000. He later took over as head coach with the Cardinals during the 2000 season and held that position until 2003. McGinnis has helped with the development of a linebacker corps that has been solid for several seasons. McGinnis is well respected by the players and has a good working relationship with the other assistants, including Cecil. Nothing would be new to him, not the job or the pressure that would come with it. But McGinnis could make the decision even easier on Fisher by deferring to Cecil.

• Peter Sirmon's take: "Dave has so much experience and so much to draw upon. He has a great background on being with some great defenses. He communicates very well. A lot of guys are very comfortable around him and that will go a long way as a defensive coordinator. Plus, he has a real consistent temperament. He's one of the most approachable coaches I've been around.''

• Why he'd be a good fit: Since joining Fisher's staff as a defensive assistant/quality control coach in 2001, Cecil has worked his way up the ranks. He earned his stripes while working under former coordinators in Cunningham, McGinnis and Schwartz. He played seven seasons in the NFL, so like Fisher, is regarded as a players' coach.

His edgy style has rubbed off on the players in the secondary, a group that's blossomed in recent years. Two players from the secondary are headed to the Pro Bowl this season — CB Cortland Finnegan and S Chris Hope. Some might view Cecil as more of a roll-of-the-dice hire, but don't be surprised if it happens.

• Peter Sirmon's take: "I think the guys love his passion for a game. He is close to still being a player and guys gravitate toward him because he knows what they are going through. He knows the pitfalls of certain coverages, and he knows how hard some plays are. He's seen them. And it's easier for guys who have been there and done it. Now that he has done such a great job of coaching, guys really love him.''

Terry McCormick dives into the lesser discussed, but very intriguing issues of the Titans off-season: the fate of high picks Chris Henry, Paul Williams and Chris Davis.  All 3 are in severe danger of losing their shot with this franchise because the time for patience has run out.

Paul Kuharsky takes a look at the philosophy behind building the coaching and training staff of the Houstan Texans.  It's a reposnse to this torching by Houston Chronicle scribe Richard Justice (whom I love when he's covering the Astros, but isn't such an astute NFL guy).

Since the image of Brenda Warner and her silver-miltary mane are seared into our memories from Super Bowl XXXIV, has anyone noticed what she looks like now?  She's just to the right of Kurt here.  There's no way I'd have recognized her without prompting.