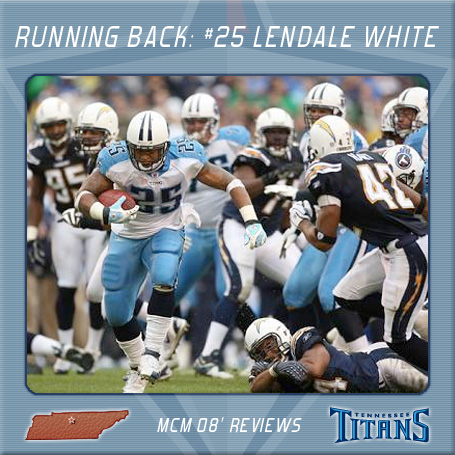 Oh LenDale, LenDale. Are you an out-of-shape, lumbering lightening-rod who talks too much and gets tackled by a stiff wind directed at your ankles? Or, are you a young Jerome Bettis clone no one fully appreciates: a pile moving, downhill-running beast with the feet of a gymnast and the funniest quotes on the entire team?

The honest truth is, he's both. The fun part is you don't know which one will show up from carry to carry.

After gaining 1,110 yards on a bruising 303 carries in 2007, LenDale took a back seat to Crazy Legs from game 1 this year. The result was 103 fewer carries, 337 fewer yards and a meager .2 YPC bump. LenDale made his impact on the goal line with 15 TDs, but he can definitely thank Johnson and Collins for getting him there. His ball security improved as he cut the fumbles from 5 to 2 this year, but his last fumble was a deal-breaker during the loss to Baltimore. Although the offense looked miles better this year, any honest Titans fan will admit that when Crazy Legs left the game the offense looked like the same moribund, fatally limited disaster it did last year.

So what are we to think of #25's 2008 performance? To me, he's an enigma wrapped inside a mystery and covered with cream cheese. LenDale brought some nice things to the table this year, but his numbers would be atrocious without feasting on the Lions and Chiefs (no. 32 and 30 in total rushing yards surrendered). I hate to say that though because every team plays terrible run defenses every year so it's not like LenDale got some unfair advantage.

My stance on LenDale is he's a great short-yardage guy who can occasionally squeeze through the hole for more and shows some nifty footwork for a big guy. He definitely is a good back up in this league. My problem with his role on the Titans is that as long as our passing game is limited we don't need a plodding short yardage guy backing-up CJ. We need another dynamic runner who can change momentum through big plays while giving consistent production. If we're going to be an elite running team, then we need 2 elite runners to ensure this team doesn't implode with one ankle injury and get stuck trying to win crucial games with just a nice RB and only putting up 3 points in the second half.