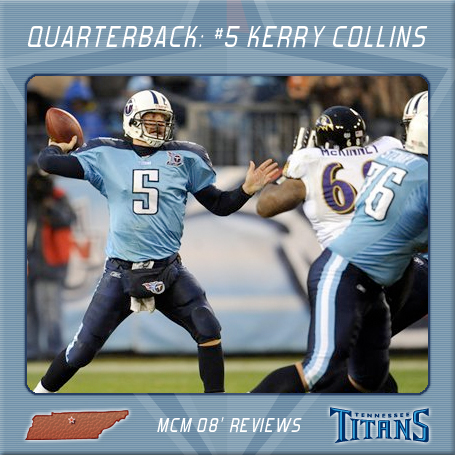 Kerry Collins was easily the biggest surprise of the 2008 season. I will admit that when the whole Vince Young ordeal happened after week 1 I was convinced our season was shot. We had all seen how poorly Collins played when he first got here in 2006, and though he looked good in his one start in the 2007 season against Houston, I was not convinced he could be a solid QB over the remaining 15 games. He proved us all wrong when he proved to be the perfect quarterback for "Fisher Ball."

As you can see above, Collins did not have a statistically great season, but he managed the offense very well. He brought a veteran presence and leadership to the huddle that VY seemed to have been lacking after his phenomenal rookie season. Collins was only sacked 9 times the entire season, including the playoff game. Obviously that is a testament to the offensive line, but it is also a testament to Collins knowing where to go with the ball and when to throw it away. He also took care of the ball throwing just 7 interceptions and fumbling the ball only 5 times.

All of this leaves the Titans with the question about what to do with Collins since his contract is up. The cons are that he isn't getting any younger, he turned 36 in December, and you have the monster contract and #3 pick from 2006 still sitting on the roster, but I don't think that outweighs the importance Collins brings to this team and this offense. It seems to me that the Titans cannot afford to not re-sign him.