Tennessee Titans Morning Links: A Super Bowl We Could Have Won Edition

Share All sharing options for: Tennessee Titans Morning Links: A Super Bowl We Could Have Won Edition 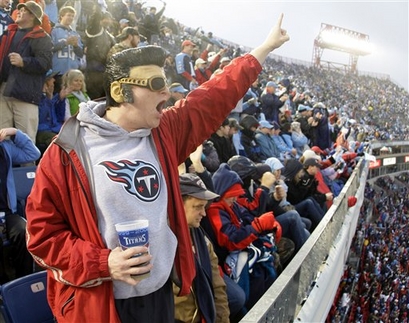 Still hurts, and telling Titans fans what they already know sure isn't going to help.  Also, Mike Pereira can't be seriously saying that delay was only .65 seconds with a straight face because that's hilarious.  Maybe 2.65 I'd believe.

PFW is hearing that if the Titans work-out a deal with Kerry Collins, you can expect Vince to be the back-up again next year.

I'd take these numbers with a grain of salt because there's no citation given for the source, but here are the 2009 AFC South cap numbers as reported by Paul Kuharsky:

The local papers duel it out with off-season outlooks, and Terry McCormick delivers a list of impact free agents on the Titans and what their signabilty is to the team.

I'm lovin' Jim Wyatt's off-season outlook for the Titans though, wherein we're really not dying for new blood at most positions and in a position to just get the best talent out of FA and the draft that's available.