Tennessee Titans Morning Links: Going From The Best Record In The League To The Worst Record Ever Edition

Share All sharing options for: Tennessee Titans Morning Links: Going From The Best Record In The League To The Worst Record Ever Edition 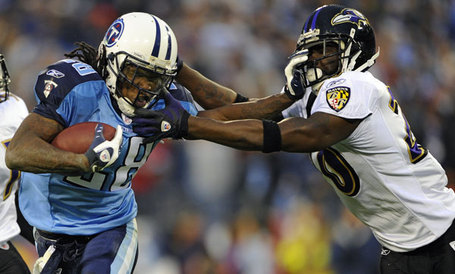 It's already been covered here, but Jim Schwartz is headed to the Lions.  What's interesting here is a possible replacement thrown out there by Terry McCormick: Gunther Cunningham.  Gunther was the Titans' linebackers coach who left to become defensive coordinator for the Chiefs.  He could certainly be in the mix now that Scott Pioli has taken over the Chiefs and Herm Edwards may be on the way out.

Paul K reprinted a very good read on Jim Shwartz he did while covering the Titans in 2003.

The Tennessee Titans are this year's Professional Team of the Year for the state of Tennessee.  They yearly award is given out by The Tennessee Sports Hall of Fame, which also named Albert Haynesworth the Male Professional Athlete of the year alongside Green Bay lineman and Martin, TN native Chad Clifton.

Jim Wyatt and Gary Estwick review the Titans 2008 season, and they correctly put Crazy Legs' emergence at the top of the list.

Is Paul Kuharsky reading MCM?  If not he effin' should be because we're in the same boat on this one:

The Titans will look to add a speedy playmaker or two who will be a value and contribute beyond expectations. They will steer clear of anyone they think could underachieve, have constant hamstring problems or be an attitude problem.

That is in this team's DNA, and it would be a major departure for them to do anything differently.

Oh I'm definitely checking this occasionally during the off-season: the online sportsbook BoDoglife.com is offering a prop bet on something rather unusual:

Who will be the QB for the Tennessee Titans for week 1 of the 2009 NFL Season?

I'm putting this at the end because it's not directly Titans related, but it is pretty relevant to our biggest rival.  Even if you don't pay attention to the parts about the shooting, it's pretty clear from this ESPN The Magazine profile that Marvin Harrison may not be who we thought he was, at least not completely:

For years, though, Harrison has offered clues that he is serious about protecting his turf, and a more complicated man than we see in games. On Jan. 4, 2003, before kickoff of an AFC wild-card game at the Meadowlands, Harrison was catching passes from Manning as Jets ball boys shagged punts from New York's Matt Turk. One of them, a 23-year-old Long Islander named Matt Prior, threw a ball downfield that bounced near Harrison. According to a New Jersey Sports and Exposition Authority report—and two people on the field—No. 88 felt the toss violated his personal space. He charged Prior, bumping him in the chest.

"You threw the ball at me!" Harrison screamed. "You're a professional! You should do your job better than that!" Everyone on the field froze. Prior asked Harrison to back away. Instead, Harrison grabbed Prior by the throat and lifted him off the ground. While fans watching on the stadium's video screen chanted for their ball boy to fight back, players and workers tried to separate the two. As Harrison argued with security, Prior was taken to a medical station, where marks were found around his neck. "This was a violent incident," says Dan Santos, security manager at the Meadowlands that day. "Coaches tried to downplay it, but we were one step from making an arrest." In the end, though, Prior decided not to press charges; he just wanted an apology he never got. The NJSEA referred the incident to state police, who didn't pursue it.

So in summation, if you're ever giving Marvin Harrison really bad news just make sure you don't tell him until you're in the car and starting to pull away (apologies to readers who don't watch The Office).