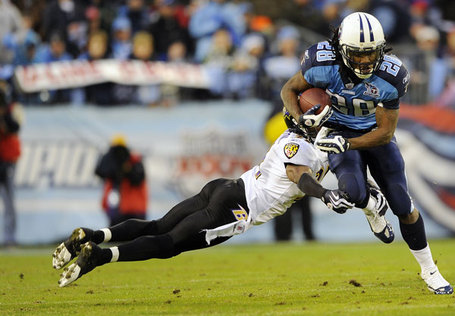 In the immortal words of gramsey: Yep. Still hurts today.

Jim Wyatt has a nice read wherein various Titans players urge the club to re-sign Albert Haynesworth.  Their primary reason is that he's the best defensive tackle in football, but he also makes a mean quiche.  You can be sure that Tony Brown is the biggest proponent of re-signing the big man because he would really struggle without Albert drawing all of that attention next to him.

It's looking more and more like Titans defensive coordinator Jim Schwartz will be offered the head coaching position in Detroit.  I still think Schwartz would be better served holding out for a better position, which is a stance I almost never endorse (strike while the iron is hot, especially n the NFL)... of course franchises are almost never this dysfunctional.

Todd McShay throws out the names of a few 2009 draft prospects who are on the slide.  I'm really surprised to see Ole Miss tackle Michael Oher sliding when you consider his incredible physical skill and their great play this year.  If the Titans think either he or David Stewart could play guard I'd say we jump at him if he slides.  Some of you may remember Oher as a subject on the best selling book The Blind Side: Evolution of a Game by Michael Lewis.

Titans offensive assistant and quarterbacks coach Bart Andrus has been offered the head coaching position with the Toronto Argonauts.  No details on his expected response.

Once awesome but now home to the dumbest commenters on Earth, the old AOL Fanhouse got a redesign and dropped the AOL banner.  That's really secondary to the fact that King Gasbag Jay Mariotti is now the most prominent writer in the blogroll to the immediate left.  Gross.  Way to stay credible Fanhus.