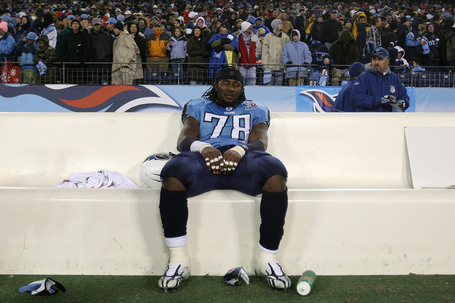 This off-season's theme according to the front office: fewer roster moves, more re-signings.

Paul Kuharsky breaks down the Titans unrestricted free agents list.  The only good news there is it looks like Reynaldo Hill is probably gone.  I'm still mad we let Mookie Johnson go to the Colts while Hill still occupied a roster spot.

Free Agent Chris Carr wants to return to the Titans - and lord knows we fans would love to gave him back, especially when he's talking like this:

"I’m going to start talking to them now about [re-signing with the Titans]. I’m going to have my agent get in contact with them," Carr said. "I’ll take less money to stay here, if I feel like they respect me and want me to play more defense, and give me more of a shot to play more next year, then I definitely want to come back, because I thoroughly enjoyed my stay here."

PFW agrees with the emerging-majority opinion: Bo Scaife is a guy we need back who will almost certainly get overpaid.  If he does leave, look for us to take a pass catching TE with the first pick because there's almost always a great TE to be had late in the first round.  There's a myriad of reasons, but it almost always seems to work that way.

Merchants and restaurant owners in downtown Nashville may be taking Saturday's loss harder than we are.

Superb commenter Rustmeister puts on a hilarious clinic in strikethrough cursing in describing the end of the Titans season.

Jim Caldwell may be more emotional than Tony Dungy?  That's not saying much: the guards at Buckingham Palace show more emotion than (sure-fire HOFer) Tony Dungy did to the outside world.

NFL wash-out Adam Jones is being sued by two employees of his record label for non-payment.  I only brought this up so I could refer to him as an 'NFL wash-out'.