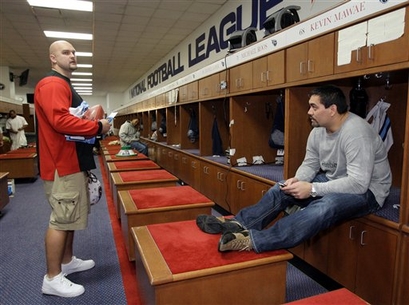 Not a good sign for those of us who hope Titans defensive coordinator Jim Schwartz stays with the team: he held an actual press conference in Detroit after his interview with the worst organization in all of sports.  I don't know that I've ever seen a coaching candidate hold a post-interview press conference before even being offered the job...

Crazy Legs most likely has a high ankle sprain, but we're still awaiting the results of an MRI.  I hope it's just a sprain and nothing that will cause future problems for the man who is, simply put, the most exciting offensive player to ever strap on the two-toned blue.

Make sure you vote for Crazy Legs for Diet Pepsi Rookie of the Year, Jeff Fisher for Motorola Coach of the Year and Big Albert for GMC Defensive Player of the Year.

Kerry Collins will retire if he can't find a starting job, and he certainly helped his case this past Saturday by throwing for nearly 300 yards.  My guess: his chances of returning are below .500, despite all of the lip service being paid right now.  Don't be surprised if the training camp battle is between Vince, Simms and a rookie or street free agent.

When it comes to VY's off-season plans, the gauntlet has been thrown:

Young declined a reporter’s request to be interviewed in the locker room on Monday as the Titans were going their separate ways for the offseason. But Fisher made it clear he expects dedication from Young regarding the offseason program. The year before, Young returned to the University of Texas to take classes rather than spend all his time in Nashville working with offensive coordinator Mike Heimerdinger.

"We expect 100 percent commitment from Vince, and we’ll accept nothing less than that," Fisher said. "This is about Vince Young and this is about spending the time here, about committing himself to the offseason program and just doing the best he possibly can to make himself a better football player, and to take advantage of the experience he gained this year, despite the fact that he didn’t play."

Craig Hentrich is seriously considering retirement after years of considerable back pain have begun to limit his effectiveness.  It'll be a sad day if the 11 year Titan leaves, but he'll go down as one of the most consistent punters in the game and the man responsible for the popularity of the knuckle-ball punt.

Fisher says he doesn't endorse a mechanical solution to the play clock problem, but I don't understand why the NFL can't treat it like the shot clock is treated in basketball: take that responsibility out of the officials on the fields' hands, and give it to the same officials who call for replays from the booth in the final 2 minutes... or automate it.  Either way, when the playclock hits zero and the ball hasn't been snapped there would be lights and an audible signal to alert everyone.  I guess that would make too much sense.

Did the TV broadcast show Ahmard Hall getting into LenDale White's face Saturday?  We saw it form the stands, but I never heard any explanation of the cause.  I will say that we were happy when Hall did it because we assumed he was challenging White to quit tip-toeing through the hole.