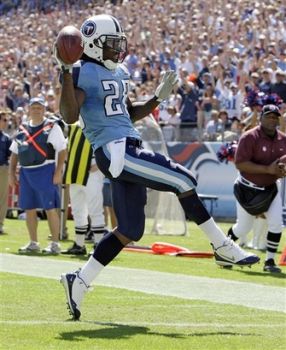 The Titans players and coaches may not be celebrating 4-0,

"We still have a chance to go 4-12," Titans linebacker Keith Bulluck said,

but the fans are.  And why not?  This is the best start in the history for this fanchise.  There is still a long way to go, as Bulluck said, but 4-0 is a heck of a way to start.

The game yesterday was another good statement by this team.  This defense proved again that they are among the best in the league.  Sure, they gave up some yards, but they forced four turnovers to set up some easy scores and held the Vikings to 17 points.

The offense was exactly what it needs to be for this team to win.  They took care of the ball, though they were pretty lucky to put the ball on the ground three times and only lose one , and they took advantage of the short field when the defense gave it to them.  That is all they need to do with a defense that is as good as this one is.

I love watching the first drive of the game under Dinger.  There is not an offensive coordinator in the league that is better right out of the gate (I have absolutely no stats to back that statement up.  It is just a gut feeling.)  The first drive yesterday went 74 yards in 11 plays and took 4:51 off the clock.  The only thing I didn't like about that drive was the play calling on the final third and two.  I thought they should have put The Round Mound (What about the FOX announcers stealing that from us?) in and take two down to pick up the two yards if necessary.  It would have been a huge statement for the offensive line.  Instead they settled for a 20-yard Rob Bironas field goal.

The defense forced the first turnover of the game on the Vikings' first drive.  The offense turned that fumble recovery into 7 points with a 1-yard touchdown run by Chris Johnson.  This was mentioned in the game thread, but I wish Crazy Legs would cut out the high stepping.  That could come back to haunt him at a very inopportune time.

The next Vikings' drive was not so good for the defense.  That drive went 10 plays for 80 yards and was topped off by a 28-yard touchdown run by Adrian Peterson.  Michael Griffin should have stopped Peterson short of the goal line, but he took a bad angle.  All in all the defense did a good job of against AP, holding him to just 80 yards on 18 carries.

The Titans' offense stalled in the red zone again on the next drive and settled for a 32-yard field goal from Bironas.  The Titans offense has been great in the red zone so far this year.  That is interesting because most of us thought that Alge Crumpler would be the player that would cure those woes, but he has been non-existent in the red zone.  It was big for Kerry Collins and company to answer the Vikings' score.

Speaking of Collins, he played another decent game yesterday going 18-35 for 199 yards.  There was some debate in this morning's link post about his play as compared to Vince Young's.  The biggest number I am looking at is his turnovers, and through 3 full games he has turned the ball over 1 time (I give the fumble lost yesterday to Kevin Mawae).  I have little doubt that VY could be putting up similar completion percentage, yardage and TD numbers, but there is little doubt in my mind that he would have turned the ball over more than once.

The next Titans' touchdown came off an AP fumble that was recovered by Tony Brown.  That was the drive with the controversial Justin Gage call.  I don't think Gage made the line to gain, but I also didn't think there was evidence on the replay to overturn it.  The Titans got a break there, and they took advantage of it.  We need to remember that as the season goes along, because just like last year with the Chris Chambers non-catch catch, there will be a call like that that goes against the Titans.  That is just football.

It was big that the Titans headed into halftime with a 20-10 lead.  The 10 point lead was part of the reason that AP only carried the ball 18 times.  The other part was the game plan put together by Jim Schwartz.  Remember two years ago when someone started a website called firejimschwartz.com?  It is amazing what a guy can do when he gets good players to work with.  He threw everything at the Vikes' yesterday, including 5 man fronts, 4 man fronts, 3 man fronts, and zone blitzes.  I will be surprised if he isn't a head coach next season.

The second half was much the same as last week.  The Titans went into super-conservative mode and let the Vikings hang around.  The play of the day came off the foot of Craig Hentrich.  AP had just scored his second touchdown of the game to make the score 23-17, and the Titans' offense had just squandered the only good kickoff return of the season from Chris Carr.  The Vikings were gaining some momentum, but that punt just killed it.

The Titans put the game away on that drive when Nick Harper intercepted Gus Frerotte, and Crazy Legs scored a 6-yard touchdown on the next play.

Now it is Ravens week.  I cannot put in to words how much I hate that team, but I will try this week.  For now we enjoy 4-0.