This is the most anticipated non-divison game I can remember in a long time.  The Titans have the chance to start 4-0 for the first time since they became the Titans.  There has been a lot of trash talking between our site and the Daily Norseman, but I think any reasonable person can agree that this is going to be a tight, physical game.  These are two very talented, very similar teams.  Here is a look at who the "experts" at the four letter picked this week: 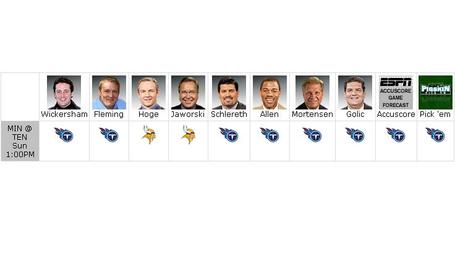 Shocked am I that Hoge picked against the Titans.

The Vikings are very good against the run.  We have talked about that all week, but you know as well as I do that Jeff Fisher doesn't care about that.  The Titans are still going to come out and hit the Vikings in the mouth.  We all agree that the Titans have a great offensive line.  They get a chance to prove tomorrow just how great they are.

There is a good chance that Kerry Collins might have to win this game.  That would have really scared me this time last year, but I have faith now that he can do it.  Look for the Titans, especially if they have trouble running the ball, to throw a lot of screen passes to Chris Johnson and a lot of dump offs to Bo Scaife and Alge Crumpler.  Those plays are good extensions of the run game and should be open against the Vikes' defense.

The Titans will also take some shots down the field because the Vikings' defensive weakness is their secondary.  The key to the game will be the offensive line giving Collins time to take those shots.  The receivers have looked better the last couple of weeks, and Justin Gage should be good to go, so I look for some big plays in the passing game. 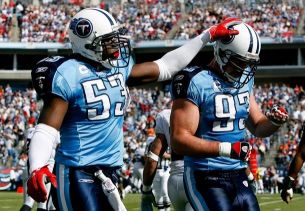 Defensively the game plan is simple on paper;  Stop Adrian Peterson.  No big deal, right?  Peterson is one of the best running backs in the league and stopping him is no easy chore.  There has been a lot of talk this week about the Titans run defense being overrated because "they haven't played anyone yet."  They will get their chance on Sunday to silence the critics.  I think they are up to the challenge.

The Titans will be the better team on the field Sunday.  The key will be to play Fisher ball.  Take care of the ball, run the ball successfully, stop the run, and the Titans walk away from this game 4-0.