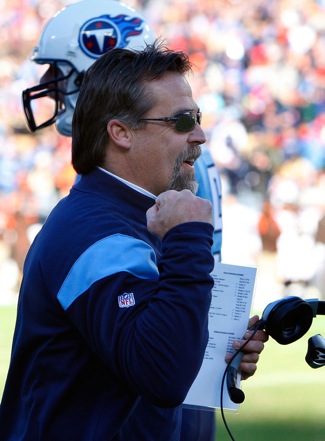 MCM gets linked on Deadspin, and Jimmy gets a quote!  MCM could not confirm rumors that such linkage would lead to a doubling of Jimmy's non-exitsent pay here under the halo.

Pro Bowl voting ends after today, so stay on your keister and help get some Titans the recognition they deserve!  And remember, since our great players like Bulluck and McNair wouldn't get voted in because we stunk, our borderline players get a boost because we're the best team in the league.

If LenDale hadn't been stopped for a loss on his last run he would have broken 100 yards and made Smash n' Dash would have accomplished a rare feet: not since the Steelers duo of Franco Harris and Rocky Bleier in 1976 had another pair of running backs both crossed the 100 yard mark 3 times in one year.

In news that made me kick the ground and curse quietly, Boom king re-injured his groin.  Fisher is 'optimistic' that he'll be able to go Sunday, but they said the same thing every week when he was out earlier in the year...

Jim Schwartz gets the New York Times treatment, and the Old Gray Lady has no shortage of nice things to say about the most innovative defensive coordinator in the NFL.  Luckily, Schwartz made sure the writer looked beyond those raw Neanderthal-stats old, lazy analysts love to quote in the hopes of showing just how good these guys are:

No statistic matters more to coaches than fewest points allowed, and by that measure, no team comes close to the Titans (10-0). They are giving up 13.1 points a game, 1.4 points fewer than the second-ranked Pittsburgh Steelers. But Schwartz, perhaps more aware than most of how numbers can be manipulated, did not embrace that figure without explanation.

The Titans gave up their most points of the season, 21, to Indianapolis. But the Colts scored 7 points with little time remaining, when the Titans were leading by 17. Against Kansas City, the Titans allowed 10 late points after the starters were pulled in a 34-10 victory. So the Titans average fewer than 13.1 meaningful points allowed.

Paul Kuharsky  gets Chris Hope's thoughts on whether it's better to be a wildcard team who gets hot at the emnd of the year, or have a bye week like the Titans will this year.  He's in a good position to weigh-in, as he was a key cog on the Steelers Super Bowl team that set the trend for hot Wild Card turned champions.

PFW adds another report that Chris Simms has improved greatly while serving as the Titans' no. 3 QB.  I hope we don't have to find out how true that is, but it's still good to hear.

After feasting on two lame duck opponents, Crazy Legs once again the leading rookie rusher in the NFL!

For everyone so quick to dismiss the win against the Browns, remember that nobody had beaten them as badly as our Titans did.