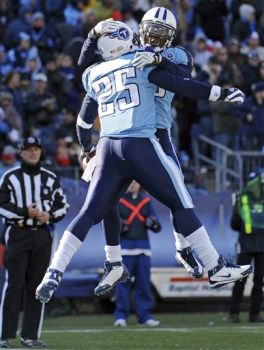 Check out the Yahoo! top performer for the Browns.  That is a sign of total domination.  (Actually it appears that Yahoo just didn't care because there were other people that actually contributed they could have chosen.)

The Titans looked really sloppy to open the game.  They gave up a 25 yard pass to Braylon Edwards on the first drive that set up the first Cleveland field goal.  I know the Browns' fans are down on Braylon, but I would take him on the Titans in a heartbeat.  He made a nice play on the pass from Cribbs that was ruled incomplete.  I still have no idea why Romeo decided not to challenge that.

The Titans first offensive drive stalled just inside Cleveland territory after two incomplete passes from Kerry Collins, and the second offensive drive lasted one play because Collins threw an interception.  That pick gave the Browns the ball at the Titans' 20 yard line, but they were only able to get a field goal from it after losing 3 yards on 3 plays.  I love the Titans defense.

The Titans offense decided to wake up on the next drive and took the ball 68 yards on 11 plays.  The touchdown came on a 4th and 1 pass to Ahmard Hall, which is one of those calls that was genius since it worked but had me screaming WHY ARE THEY THROWING?!? when it happened.  Hall does a lot of great work for this running game, so it is awesome to see him get a touchdown.

The next 8 minutes of the game saw a lot of short runs and incomplete passes.  The Titans got their second touchdown of the game on a LenDale White 3 yard plunge.  That drive saw two 20 yard completions, one to Justin McCareins and one to Alge Crumpler, and seemed to be the drive that snapped Collins out of his early game funk.

The Titans third TD was set up by a Michael Griffin interception and 36 yard return.  Collins did a great job on that TD pass to Justin Gage of keeping the play alive.  It is amazing how much closer to mobile he is this season.

Smash fumbled, his first of the year, on the second play of the Titans' next drive to give the Browns great field position at the 26.  Once again the Titans defense was up to the challenge and did not allow the Browns to gain a yard beofre Phil Dawson missed the field goal attempt.

D'Qwell Jackson made a great interception on the ensuing Titans' drive that once again gave the Browns good field position, and once again the defense was able to hold them to a field goal.  It is nice to see the other team being that one that settles for field goals.

The fourth quarter of this game was about the most boring quarter of a Titans' game so far this season.  The only exciting play was the Chris Johnson 25 yard touchdown run.  I said it in the game thread, but Crazy Legs better lose the habit of holding the ball out like he did yesterday.  That will come back to burn him at some point if the doesn't.

The penalties need to be addressed.  They didn't matter yesterday because it was an inferior opponent, but they can't afford those numbers against any of the 3 remaining teams or in the playoffs.  That was the last week that sloppy play will get a win.

That is all of the complaining I have though.  12-1 is awesome.