Tennessee Titans Morning Links: Baby Won't You Carry Me / Back To Tennessee! Edition

Share All sharing options for: Tennessee Titans Morning Links: Baby Won't You Carry Me / Back To Tennessee! Edition 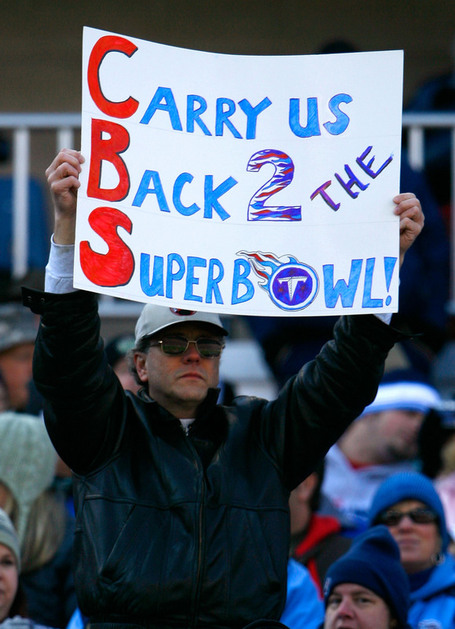 (Feel free to click here if you don't know the reference in the title and this pic...)

Lets take a minute, step back and give a big tip of the hat to what this Titans team and coaching staff have accomplished already: locking up the 2008 AFC South Conference Title!

Paul Kuharsky points out the since the 'Best team in the AFC' - the Jets - lost to unwatchable San Francisco, the Titans assured of a first round bye in the playoffs.

Congrats to Crazy Legs for joining legends Earl Campbell and Eddie George as the only Oilers/Titans RBs to break the 1,000 yard mark a rookie!  Has the pick for our offensive MVP ever been this easy?

Wasn't that nice to celebrate?  Now back to business, because our fellas won't win a lot of games if they're getting popped for 131 yards on 13 penalties like they did against the Browns.

Teresa Walker runs down the sizable list of defensive lineman who have been cast off and nearly run out of the league, only to carve out a productive career with the Titans.  The list is a testament to how diligent the Titans' scouts are and how adept the coaching staff is at finding guys who can fit the specialized roles in our scheme.

If you live in the Nashville area, be on the look-out for special 'Smash n' Dash' t-shirts at your local Krogers (I'll post online ordering information as soon as I can find it)!  I saw one last night, and they feature cartoon caricatures of Crazy Legs and LenDale.  Be sure to pick one up, since all proceeds will go to charity:

"Me and C.J. were talking about it for awhile, and we called somebody and got them involved and it took off," White said. "Now, they've got the shirts printed up. Hopefully, we can keep it going and sell a lot of them, so we can give back to the community and give some money to foster kids. Hopefully, we can make enough so we can take some of them out shopping for Christmas."

What does the duo think of the artistic rendition?

Both men appreciated how true their likenesses were in cartoon versions.

"It's pretty close, but they could have given me some more muscles," Johnson said.

Piggy backing off of that article, Dave Ball gets some much deserved love from Pro Football Weekly.

I wish I could say that only Peter King is dumb enough to still have the Giants ranked ahead of the Titans, but alas he won't be.  I get the feeling, however, that our dominance will be proven over the next 3 weeks.

This article is priceless:  It's calling for the firing of both the offensive and defensive coordinators of the Jets, but gets special mention here for this gem:

These are the depths to which the team has fallen not two weeks after beating the Tennessee Titans in arguably the best regular-season win in franchise history.