Share All sharing options for: Tennessee Titans Morning Links: Keep Your Eye On The Ball Edition 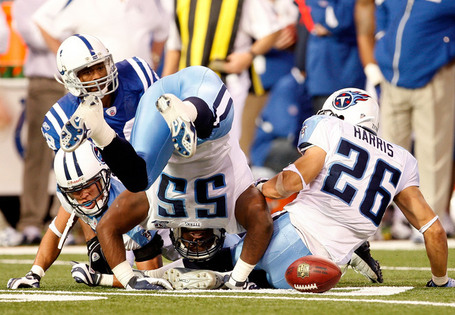 Congrats to our Titans, who finished no.1 in ESPN's final Power Rankings.  Now time to move on, because we're all back to 0-0 records.

Even though our defense surrendered the defensive scoring title with Sunday's no-show in Indy, The Sporting News knows that you have to be impressed with what the defense accomplished this year despite Boom King being out for a big chunk of the year.

Yesterday's limited allotment of playoff tickets were gone in 3 minutes.

Paul Kuharsky evaluates the 2008 season of each AFC South team.

Teresa M. Walker goes in-depth on the 2 running back style that may be here to stay in the NFL.

Bucky Brooks' final Awards Watch column ends with no Titans in the lead in any category, and Jeff Fisher isn't even on the radar.  Something tells me Fish will get some votes even though he won't win.

Check out SI's Don Banks for the best coverage of the Shanahan firing.