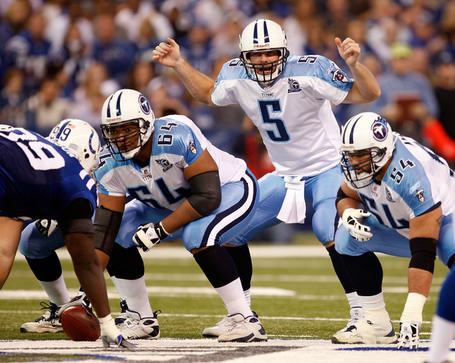 After failing to steal Smash and Dash, Carolina's running back tandem have launched a campaign to become known as Double Trouble. Very original.  Seriously, this video is a hilarious parody of a campaign attack ad, complete with funny shots at LenDale and at least one semi-truth: apparently they don't know that Earnest Byner, who actually filled out the trademark info, is our RB coach.

Mangini is out, is Jim Schwartz in?

Yahoo! links Shwartz to the vacant Lions, Browns and Rams head coaching positions.  I just hope Fisher can keep those teams' paws off of Schwartz until our season is done.  I'd rather he not be interviewing for jobs and building a staff during a potential Super Bowl run.

No need to build on what Chris Hope said about where the Titans' mindset is right now:

"Everything other than that, it doesn't matter," safety Chris Hope said. "We're 0-0. There are no records, no Pro Bowls, none of that. It's an elimination tournament now, and winning no matter who we play against is the focus.''

Expanding on our post regarding Albert's contract yesterday, Terry McCormick reports that preliminary negotiations between the Titans and Haynesworth's agent have resumed:

"Mike called me today and expressed the Titans interest to begin negotiations on a long term deal for Albert," [Albert's agent] said in an e-mail. "We had a preliminary discussion and our talks are in the very early stages. It is my intent to keep any future conversations I have with the Titans regarding Albert’s contract private for the time being.

3,000 to 4,000 more playoff tickets for the AFC Divisional game went on sale this morning, but if you're finding that out here then you're most likely out of luck.

Uggh.  Last Sunday's meaningless performance knocked us down 4 spots to 5th place in the final DVOA rankings for 2008.

But we still killed the Bendability index at CHFF.

J.J. Cooper at the AOL Fanhouse has a nice breakdown of the playoff contenders and pretenders, including some food for thought to those who would label the Titans as a fraud:

There's a lot of thought that the Titans are a 13-3 imposters, but it's hard to say that Tennessee isn't tested. Tennessee has beaten the Colts, Steelers and Ravens--arguably the three other top teams in the AFC.

There are several impressive wins this year, but the best may be the Week 16 win over Pittsburgh. The Steelers could have swiped the No. 1 seed with a win, but the Titans dominated both sides of the line of scrimmage despite the fact that Albert Haynesworth was standing on sidelines in street clothes.

And beyond that, Tennessee has no really awful losses. The Titans lost by one to the Texans at the point of the season where Houston was playing outstanding football. They also lost to the Colts in a meaningless Week 17 game, and were blown out by the Jets. The loss to New York was the team's worst performance of the season, but even that wasn't a complete debacle, and it was a loss to a team with a winning record.

Paul Kuharsky serves up the finalized list of Titans opponents for 2009: