Share All sharing options for: Tennessee Titans Morning Links: Is He Tuff Enough To Replace Tuff In Practice? Edition 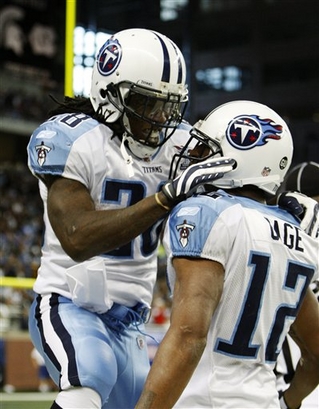 Jeff Fisher falls to 2nd place in the Coach of the Year rankings in this week's awards race list by Bucky Brooks.  If Fish doesn't win COY after the performance he squeezed out of this team, despite the potential firestorm around VY earlier in the year, I'll be severely disappointed.  Fisher is too good of a coach not to have one this award already in his career.

Jim Wyatt's 5 Things We Know segment this week makes a good point we Titans fans should consider when measuring expectations against the Browns: despite being terrible, the Browns haven't lost a game by more than 10 points since Week 3, so don't bank on a blowout or a pretty performance by our offense.

Jimmy had it first, but t bears repeating: Vote for Crazy Legs in the current Rookie of the Week poll!

Here's a great breakdown of the Titans' playoff and first round bye scenarios.

Paul Kuharsky has an update on the fan voting for the Pro Bowl, including surprisingly good showings for Kerry Collins, Eugene Amano and Kevin Mawae.

Don Banks puts a familiar name near the top of this coaches-in-waiting list:

• Jim Schwartz -- After strong interviews last offseason in Washington, Miami and Atlanta, Schwartz is nearly assured of parlaying the success of Tennessee's defense into a No. 1 job this time around. He's smart, articulate, extremely well prepared, and his coaching pedigree includes having worked for both Bill Belichick and Jeff Fisher.

The Titans have slipped to 4th in Football Outsiders' DVOA rankings, and it's the rushing defense that's dragging us down.

The Red Zone analysis puts the Titans strength of schedule at 6th, while the Giants wallow in the middle of the pack.  Remember that when the power rankings go up.

ESPN's DJ Gallo imagines who would make it to the Super Bowl under the idiotic college system for determining a championship game.

I know you people are reading more great articles than I can track down each day, so if you have a link you'd like to submit for tomorrow's Morning Links, email me at mcmaugustwest@gmail.com!  (Be sure to include your commenting handle so I can give you semi-anonymous credit.)