Share All sharing options for: Tennessee Titans Morning Links: Can You List A Game Plan As DNP/Coach's Decision? Edition 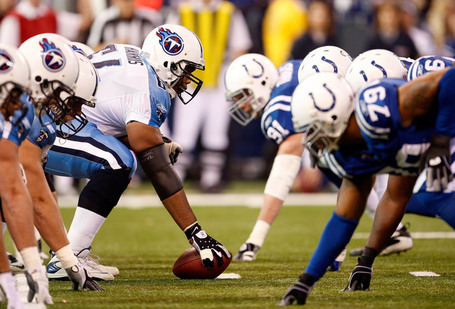 Well, we looked that bad in most of the preseason and that turned out ok.  We should have added Mike Heimerdinger and his assistants to the long list of Titans who sat-out this game because that scheme had nothing going on, and it was pretty obviously intentional.

The one thing I do like about what happened Sunday is that it'll give Fisher all the ammo he needs to ride these guys like rented mules over the next two weeks.  There's a near zero percent chance he lets these guys come out flat when it's playoff time in Tennessee.

VY had a few good passes and more bad passes in a performance that looked a lot like what we've seen from him since halfway through his 2nd season.  His body language looked better, and it was good to see him signal to some receivers that he was taking the blame.  We just need more passes from him like that beauty to Justin McCareins Brandon Jones he dropped right over the defender.

The only thing the Titans lost that mattered yesterday was the no.1 scoring defense title, which ended up in Pittsburgh's hands after they shut-out the hapless Browns.

At 2 hours and 29 minutes, Sunday's exhibition was the fastest NFL game since 1996.  That surprised me because it still felt like it took for dang ever.

The Sporting news breaks down what each AFC playoff team should feel good about and what they should worry about. The only one of their worries for us that ring true to me is the need to get Albert back in top form, because I'm not buying the 'lack of playoff experience' as long as we're starting Kerry, Hope, Harper, Scott, Haynesworth, Bulluck and most of the coaching staff that got us to those AFC Championships and Super Bowl.

In the first media hit-job I could find, Gregg Doyel shows that he doesn't understand what happened in regards to game-planning (none), personnel (back-ups in the line, WR spot and backfield) and intensity (coma-like) on Sunday.  VY didn't look great, but if you think that's a suitable sample enough to make a judgement then you're just a highly regarded troll.

PK looks ahead at the Titans playoff path, and it's surprising cogent thought:

1. Tennessee (13-3). Oh, the Titans will need the first-round bye. Imagine the physical welts a divisional-playoff game against Baltimore would leave, and then, in a potential title game, the Colts or Steelers coming to town -- Indy on an 11-game winning streak, the Steelers with Terrible Towel revenge on their minds.