Tennessee Titans Morning Links: We Never Mail It In Here AT MCM Edition

Share All sharing options for: Tennessee Titans Morning Links: We Never Mail It In Here AT MCM Edition 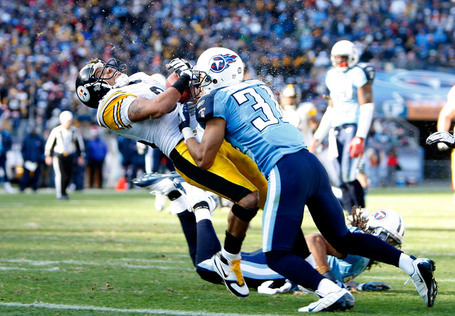 [Site News: posting will probably be lighter than usual for the rest of the week, and I'm going to put up some links at some point on Friday if there's worthy news.  Hope you all have a great Holiday and remeber: if you don't like someone in your house, just stomp on their napkin.  Apparently it'll get your point across.]

As the Titans players and coaches decide who'll sit and who'll play Sunday, talk keeps turning to the fact that only the top seed to win the Super Bowl in recent history were the 2003 Patriots.  This stat is annoying to me because playoff seeding has zero to do with who wins the Super Bowl since the game is played on a neutral field on even rest; seeding only affects who gets there and every year in that same period there's been a no. 1 seed who makes the Super Bowl: the 2007 Patriots, 2006 Bears, 2005 Seahawks, 2004 Eagles, 2003 Patriots, 2002 Raiders, 2001 Rams and the 2000 Giants were all top seeds who made it to the dance.

Combine a top 5 defense with a top 10 offense, and you get the no. 1 spot in FO's DVOA rankings... at least that's how the Titans got there!

Say hello to the newest Titan, offensive lineman and former Buckeye Doug Datish.  He was added to the practice squad to play guard and center and give us some depth after Mawae tweaked his elbow against the Steelers.

As you go over the 5 Things We Know about the Titans and Colts, and you see  'The Colts are Sizzling' at number 2, keep in mind that they also haven't had to play a team above .500 since Nov, 9th.

Mike Florio is such an idiot.  Read this and tell me Keith Bulluck sounds nervous:

"It was definitely no disrespect to the players on the Steelers or players from the past because the Pittsburgh Steelers," Bulluck said, "they are one of the foundations of this league that we play in.  So it’s definitely not like that but it definitely is, look, we’re a team that, we don’t get a lot of respect.  We have the best record in football and we’ve been playing the same football all year round and people have been wondering, ‘How is this team doing it?’  In the playoffs they’re going to get to see.

"We were just excited.  We were just happy.  And I don’t care who we play, if they come with 15,000 fans and we happen to be the victors that day, yeah, I’ll probably stomp their towels, too."

PFW gives us their All-American list of college players, giving heavy preference to players' pro potential, but neither Eric Berry nor D.J. Moore make the CB list so I would take all of this with a grain of salt since it can't be that well researched.