Maybe All We Needed Was A Shot In The Arm

Share All sharing options for: Maybe All We Needed Was A Shot In The Arm 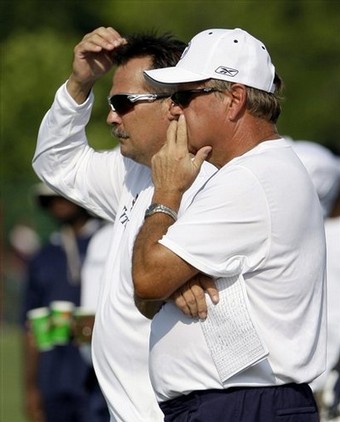 (Apologies to my personal demigods Wilco for the title)

Many of us said it before the year started, and now it's obvious how true it is: Mike Heimerdinger was the most important addition to the Titans this off-season.  Crazy Legs is a close second, but I have no faith in the idea that Norm Chow would have been able to use him anywhere near as well as 'Dinger has this year.

Now, as we make these comparisons, let's put aside the fact that not a single offensive skill player improved under his tutelage (Bo Scaife was the lone exception, but he was that good from day 1 on the team).  We're also going to throw-out game planning and play calling because those are subjective and anecdotal.  Don't get me wrong, they're crucial elements to judging an O-coordinator, but we're going to focus on areas where we can be a little more objective.

Simply put, Chow was a damned fine college coordinator, but not a good professional one by any stretch.  He couldn't make halftime adjustments and he couldn't execute in the redzone.  Those are two of the biggest parts of an offensive coordinator's job, and 'Dinger kills the man in both areas.

Want proof?  Then check-out this comparison of the 2007 regular season numbers vs. the 2008 numbers through 15 just games:

So what else could explain this improvement?  Lets examine the likely culprits:

So after all of the crap Fisher took last year when Chow was fired rather unceremoniously, and Dinger returned to little or no fanfare outside of a few blogs and message boards, it's become obvious that the right move was made.  Now, we better hope 'Dinger doesn't coach himself out of Nashville and into a head coaching spot elsewhere...

Let us know your thoughts in the comments!