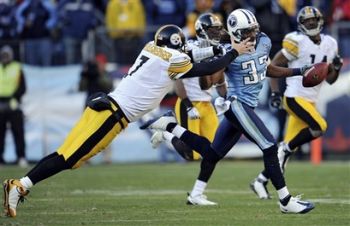 All stupid towel controversies aside, it cannot be overstated how HUGE of a win this was for the Titans.  When we heard the news last week that they would be without Albert Haynesworth and Kyle Vanden Bosch, most of us who were being honest thought this was going to be a really tough game for the Titans to win.  We have been hearing all year about how good the Steelers defense is, and I was worried, especially with Kerry Collins's performance last week, that the Titans might not be able to get 10 points.  Combine that with the gaping hole from missing the best defense end/defensive tackle combo in the league and things didn't look good.  "But that's why they play the game!"

I have to start off with an apology of sorts.  My friend Matt, who was nice enough to invite me to the game yesterday, told me within 5 minutes of getting to our seats that what I said here about Collins was "out of bounds," and you know what, he was absolutely correct.  When I wrote this last week I didn't call for the Titans to put Vince Young in, but I did say they should look at the possibility.  I couldn't have been more wrong.  Collins has led this team to 13-2.  Could the Titans have won that game in Houston last week with VY in there?  Maybe, but Collins has earned more rope than what I was giving him last week.  He isn't a Pro Bowl quarterback, and he doesn't have the upside of Vince, but he is absolutely the right guy for this team.

The play of the game happened in the first quarter yesterday.  The Titans had gone three and out on their first two series.  The Steelers first series ended with a punt, but they were driving on their second series when Ben Roethlisberger took off on 3rd and goal from the 7.  Big Ben was met at about the 2 yard line by a couple of Titans, put the ball on the ground, and it was recovered by William Hayes.  That play kept the Steelers from getting any points after they had 1st and goal at the 3 yard line.

The Titans didn't get any points on the ensuing drive, but they were able to get a couple of first downs and flip the field when Craig Hentrich's punt was downed at the 3.  The Steelers gained 0 yards on three plays and punted the ball back to the Titans.  Chris Carr returned that punt 12 yards and gave the Titans great field position that set up a Rob Bironas 42 yard field goal for the first points of the game.

Big Ben gave the ball right back to the Titans on their next drive when he was sacked by Hayes and put the ball on the ground again.  The Titans were able to get a TD on that drive on one of the prettiest plays of the season.  Kerry Collins threw a beautiful ball to Justin Gage on a post.  Right as Gage caught the ball, Troy Polamalu lit him up, but Gage hung on for the touchdown to give the Titans a 10-0 lead.

Aside: Wasn't it really strange that the Steelers hurried to the line to spike the ball instead of just taking their final timeout before the field goal attempt?  It didn't matter at all.  I just thought it was weird.

The Steelers would fail to get points on the drive when Jeff Reed missed a 33 yard field goal as time expired in the first half.

The scariest moment of the game came when the Steelers punted after going three and out on their first possession of the second half.  Carr decided not to field the punt but didn't get away from it.  It took a funny hop, as footballs tend to do, and hit him right in the facemask.  Luckily for Carr and the Titans, he was able to fall on the ball and keep Pittsburgh from having an easy scoring chance.

The Titans were unable to do anything with that possession and punted the ball again.  The Steelers got their first TD of the game with three long passes on the ensuing drive.  The touchdown was a 21 yard strike to Heinz Ward.  Cortland Finnegan put a monster hit on Ward, but he was able to hang on and fell in the end zone.

The Titans kept the Steelers from building the momentum on what might be my favorite drive of this season so far.  The Titans faced a 3rd and 20 after Collins was sacked by James Harrison for a 10 yard loss (the only Pittsburgh sack of the game).  Justin McCareins, who was the brunt of a lot of punishment here at MCM last week, made a spectacular tip-toe 19 yard catch to give the Titans 4th and 1 at the Pittsburgh 21 yard line.  Instead of going for a field goal that would have cut the Steeler lead to 14-13, Jeff Fisher, The Gambler, decided to go for it.  The play call was a little scary; a fake to the fullback/pitch to Chris Johnson, but it worked when Crazy Legs juked the Steeler corner out of his jock and took it in for a TD.

Please, please, please, break Dash of the celebrating before he gets in the end zone.  Not only is it classless, but it is going to come back to hurt the team at some point if it doesn't stop.

That play really changed the game.  Michael Griffin made his first of two picks on the next Steeler drive and returned it 32 yards to give the Titans another great scoring opportunity.  It looked like the Titans were going to have to settle for a field goal on that drive.

Aside #3: A question for you because I was at the game and haven't had a chance to watch it yet, was the ball where they picked up the pass interference flag really tipped?  It didn't look like it on the replays they showed in the stadium.

The Titans lined up for the field goal, but the Steelers were called for a simulating the snap penalty that gave the Titans a first and goal from the 2.  Two plays later LenDale White took the ball in for a touchdown that pretty much ended the game.  There was still a lot of time left, and the lead was only 24-10, but you could tell that series took the wind out of the Steelers.

After Jason Jones sacked Big Ben to end a couple of Pittsburgh drives, Griffin officially ended the game with his second interception of the day that he returned 83 yards for a touchdown.  He put a really nice move on Mewelde Moore at about the 5 yard line to get in the house.

The Titans accomplished another season goal in clinching home field advantage with this win.  Now there is a very good chance that the Titans will see the Steelers again in the AFC Championship game.  I can assure you, if that happens, it will not be another blow out.  I believe the Titans are a better team than the Steelers, especially with Albert and KVB, but they are not 17 points better.  The good thing is that Coach Fisher will not let the players get complacent, as was mentioned in the comments of one thread here.  The Titans will be ready when the Steelers come to town again.