Tennessee Titans Morning Links: Well I Don't Dry Off My Dogs With A Flag Edition

Share All sharing options for: Tennessee Titans Morning Links: Well I Don't Dry Off My Dogs With A Flag Edition 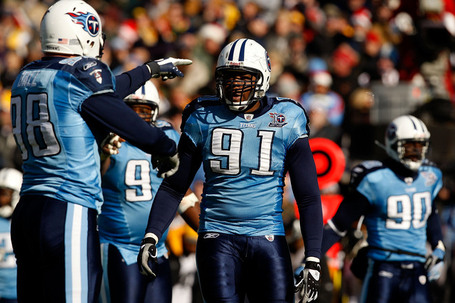 I'm spearheading the campaign to get Jason Jones starting next to big Albert in the playoffs.  Anybody with me?

Some people (mainly old white men) aren't happy that LenDale, Kearse and Crazy Legs were using towels like towels.  Yawn.  It's not like they defaced Steely McBeam or anything...

Even more on towels.

If you're still upset about the towel thing, please send all complaints here.

We'll have more on the number of Steelers fans polluting the Cumberland later, but it's safe to say the Titans players were none to happy about it.

Michael Griffin has to be seen as a driving force of this defense, and one of the premier safeties in the NFL after upstaging the vaunted Polamalu yesterday and registering his 6th and 7th INTs.

Peter King is the only writer I've seen so far who really understands what our defense pulled off yesterday with Boom King and Albert on the sideline:

• No wonder Tennessee wins every year. The Titans have the best defensive depth in recent NFL history. No Albert Haynesworth till the playoffs? No Kyle Vanden Bosch till the playoffs? No worries! We'll just trot out a second-round pick from Eastern Michigan, Jason Jones, to get 3.5 sacks and force three fumbles in a game for AFC home-field advantage through the playoffs. We'll just start a free-agent from UCLA who didn't even play football in 2007, Dave Ball, for Vanden Bosch, rotate him with Jacob Ford, and get four quarterback hits out of them. And when Jevon Kearse, the left end, goes down early in the second half, we'll throw a fourth-round pick from Winston-Salem State, William Hayes, in the game, and he'll get a sack of Ben Roethlisberger, a forced fumble, and a fumble recovery.

Paul Kuharsky delivers the best non-MCM recap you'll read on yesterday's game, and here he explains those perplexing penalties that we couldn't get explained because of the sound problems.

Our fellas played a great game, but now it's time for Fisher to remind them that paving the road to the Super Bowl ain't the same thing as going down it.