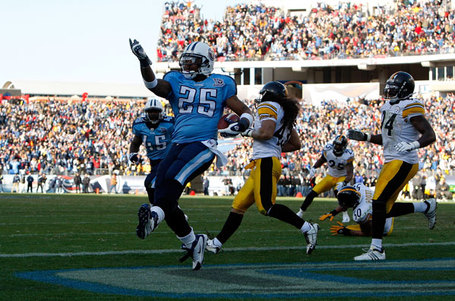 They moved the ball very well against what is statistically the best defense in the NFL.  The Titans are the first team this season to go over 300 yards of total offense against the Steelers.  Kerry Collins bounced back from a terrible effort last week to play very efficiently on Sunday.  He was 20 of 29 for 216 yards with 1 touchdown and 0 interceptions.  The offensive line did a great job of protecting him.  He was only sacked one time and really wasn't under that much pressure all day.

The receivers played a great game.  I can't remember a dropped pass, and Justin McCareins even had a solid game after looking like the worst receiver ever last week.  His 19 yard tip-toe reception was one of the biggest plays of the game.

The biggest play of the game was the 4th and 1 pitch to Chris Johnson.  Crazy Legs made a great cut and took the ball 21 yards for the game changing touchdown.  CJ and LenDale White both had solid days.  Smash was able to help play keep away when the Titans had the lead late in the 4th quarter.

Jason Jones is probably the player of the game in this one.  He had 3.5 sacks and 3 forced fumbles filling in for Albert Haynesworth.  It is really good to know that this defense is more than just Fat Albert.  The D played well all day.

The Titans now haven't beaten a good team since an hour ago.  I can't wait to see what people possibly try to find wrong with this team after that game.  They just knocked off the 2nd best team in the AFC without their two best players.  That should give them the momentum they need heading into the playoffs.

Enjoy the win.  The road to the Super Bowl now goes through Nashville.  Much more on this game tonight and tomorrow.