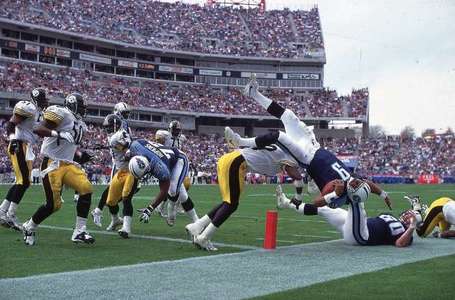 This week's game revives a rivalry that many younger fans may not be able to remember, but should definitely appreciate: the old AFC Central.  Just thinking about Joe Nedney's acting, Steve McNair's summersaults,and even recaps of the '78-'79 AFC Championship games should get any fan's blood pumping.

Coach Fisher has a big-time double header this weekend: the day before the Titans try to secure home field advantage against the Steelers, His son Brandon will be playing for the Montana Grizzlies in the  Division I Football Championship Subdivision (formerly Division I-AA) National Championship game against Richmond.  We here at MCM wish young Fisher good luck!

With Boom King and Big Albert sidelined, we're going to get a good chance to see what the D-line's rookies - Jason Jones and William Hayes - can do with more snaps.  Look for Jacob Ford (6 sacks on the year already with limited reps) to step it up as well.

Pittsburgh is expecting more blitzes from the Titans front 7 this week, and with Roethlisberger's habit of taking sacks I'd say it's a good bet on their part.

Curious as to why Kerry Collins has the first quarter stats of a blind offensive lineman trying to play QB?  So is he:

[Collins] hasn't thrown a touchdown pass in the first quarter all season, but he has thrown six interceptions. After that he's gotten his act together — Collins has 11 touchdowns and one interception from the second quarter on.

"I wish I had that answer,'' Collins said, shaking his head. "I just don't have an explanation for you. But for some reason, I have always been that way.''

A look back at his 14-year career should have provided the Titans plenty of clues about what to expect from Collins early and late in games. The first is the only quarter in which he's thrown more interceptions than touchdowns. It's the quarter in which he's posted his worst passer rating.

Cortland Finnegan got fined $25K for his helmet-to-helmet hit on Shaub last week.  Everyone who saw the hit knew this fine was coming, but Cort has to be careful because he's certainly becoming a target for refs.  If he's not smart about it, it'll be he that WRs try to provoke into dumb penalties, not the other way around.

Boom King feels good after successful surgery to repair his ailing groin muscle, and plans to be playing at full bore when the playoffs come to town.

ESPN's David Flemming has a great article on the offensive revolution that's bubbling to the surface in the NFL, and even more radical solutions percolating at the lower levels, like the A-11:

It's called the A-11: an überspread offense with virtually no offensive line, 11 potential receivers and backfield choreography that resembles Princeton basketball's motion offense. The two would-be Lombardis dreamed up the scheme for a small, Oakland-area school called Piedmont High, where Humphries serves under Bryan. In less than two years their mad creation has kicked off a genuine football uprising, transforming an obscure Northern California team, and hundreds more just like it across the country, from pushover to powerhouse.

The A-11 isn't close to legal in the NFL, and probably never will be. But the ideas behind it—two QBs are better than one, what occurs before the snap is just as important as what occurs after it, physical limitations can be shattered by ingenuity —look increasingly to be football's future. Maybe its savior. "The A-11 isn't just new and cool," says Humphries. "It's needed."