Tennessee Titans Morning Links: One Trick Ponies And The Fans Who Love Them Edition

Share All sharing options for: Tennessee Titans Morning Links: One Trick Ponies And The Fans Who Love Them Edition 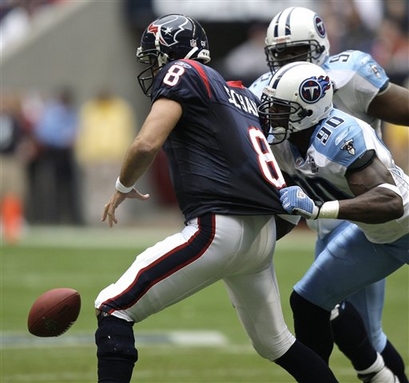 The Steelers haven't allowed a 100 yard rusher this year, but they haven't faced Crazy Legs and this offensive line either.  I'm hoping Dinger can give the kid a rest over the next few weeks, but still have him be very productive (i.e. high YPC average) against these next 2 tough opponents.

Looking for a guide to hating the Steelers?  You can always count on KSK to come through in the clutch.

Why did Titans LB Keith Bulluck get snubbed from the Pro Bowl?  Thank the sack numbers outside rushers get to collect in the 3-4 defense.  Nice to see an NFL star get snubbed for not being a one trick pony.

A lot of people have justifiably been day pole-jocking the Steelers D (lord knows I would be if the Titans' D had those stats), but lets not pretend like anything other than points matter, and we're only .4 points behind them on a per game average.

Finnegan vs. Ward should indeed be a heck of a match-up, but I'm really hoping it shakes-out where Finnegan is on the speedy Santonio Holmes more often, and Ward is covered by the crafty Nick Harper.

Vince Young filed a lawsuit against some jokers from Houston who copyrighted "VY" and variations on the theme "InVinceable", rookie CB Cary Williams is headed to the IR after getting hurt last weekend and new practice squad DT Amon Gordon will be active for Sunday's game to take the place of Haynesworth and Vickerson.

Rookie Jason Jones has been a huge addition to our D-line and a big reason there's a lot more depth this year, but did you know he's also got a little Columbo in him?  Observe:

• Rookie DT Jason Jones, who gets the start in Albert Haynesworth’s spot on Sunday, has been wearing the jerseys of fallen teammates Haynesworth and Kevin Vickerson (currently serving a four-game suspension) in practice in recent days. But it is not out of tribute that he donned Vickerson’s No. 96 last Friday or Haynesworth’s familiar No. 92 on Wednesday.

It is much simpler than that for the rookie, who usually wears No. 91.

"Rookie pranks are still going on in the locker room right now. Right now, I can’t find both of my practice jerseys," Jones said. "I’ve got a couple of suspects in mind right now. I’m doing a little private investigation. I’m not going to release (the names) right now. There are some funny guys in this locker room."

Savor the late season match-up of teams with this good of combined records, because they a few times a decade:

Since 1995, there have been only five previous games in the final two weeks of the regular season featuring teams with five or fewer combined losses.

For the Nashville area fans, The Sporting News has a great read with TSU product Dominique Rodgers-Cromartie.