Tennessee Titans Morning Links: Back To Being Disrespected By The Sheeple Edition

Share All sharing options for: Tennessee Titans Morning Links: Back To Being Disrespected By The Sheeple Edition 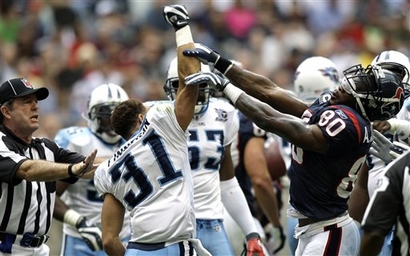 So we did what everyone else in the league had done before us: laid an egg against a dangerous opponent whom we still should have beaten.  It happens.  Time for the team and we fans to reflect for today, then button up the big boy pants and move on.

Losing this game > Losing Big Albert.  This one hurts, ladies and gentlemen.  Time to break out the rosary, prayer rug or whatever you've got to help the big man's knee heal completely in 3 weeks.

I know we're all dumbfounded by the decision not to take the FG, and certainly more stunned that 'Dinger didn't dial-up a play to get the ball into Crazy Legs' hands, but here's the official explanation as reported by Paul Kuharsky (who makes a lot of great points throughout this breakdown):

"I told the players I'll take this one. I should have taken the wind in the fourth and not the third and that's exactly why I decided not to let Rob kick. It was not within his range. I knew exactly what his range was and I just felt that we would get things going into the fourth quarter that it wouldn't be a factor. So that's why we went for it on fourth down. It was not a good coaching decision."

Follow-up No. 1: What was Bironas' range? "I know he was about 5 yards outside his range. He made attempts before the game and couldn't get them close and we were outside his range with wind a factor and wind was clearly a factor in here."

"I thought we were going to kick it, but it is a coaching decision," Bironas said. "There was a decent breeze out there."

This loss isn't nearly as important as what the Titans players, coaches and even fans make of it is.  Everyone who already doubted us is going to write us off. I look forward to seeing these men play with a little more rage and a lot less style... it's what got us to 11-0, and it's what'll get us to the promise land.  Case in point , Peter King kicked us down to 5th place despite the fact that NEARLY EVERYONE ABOVE US HAS A WORSE RECORD AND WORSE LOSSES.  I expect the rest of the NFL sheeple reporters to follow suit.

J.J. Cooper at the AOL Fanhouse asks a great question: once you consider the emerging match-ups, does anyone really want the top seed in the AFC?  Consider:

But this year, it's highly likely that the wild card teams will be a tougher match-up than either of the division champs who have to play on the first weekend of the playoffs. The Colts are on track to finish 12-4, but they have already lost the AFC South division crown to the Titans. The 9-5 Ravens are in the battle for the second wild card spot with one of the toughest defenses in the league. It's highly possible that the Colts will be seeded No. 5 and the Ravens will be No. 6 when the playoffs roll around.

In comparison, the 8-6 Broncos are assured of at worst the No. 4 seed if they can win one of their final two games to finally clinch the AFC West. Nevermind the fact that the Broncos have given up 40 more points than they have scored this year or the fact that they have beaten two teams with winning records

Andre Johnson torched every DB on the Titans roster yesterday, but he's still making tee times for a few weeks so lets not freak out like we're going to have to see the man again this year.

The Sporting News has several good updates on the playoff picture and the past month of Titans football.

Pinoy linked it in the sidebar, but in case anyone didn't see it (the story came out too late for Friday's links) Bud Adams talked at length about Vince Young and the Titans to the Tennessean.  It's a great read that should finally shut-up idiots and hacks like Mike Florio who have been postulating that Young would be gone before next year.