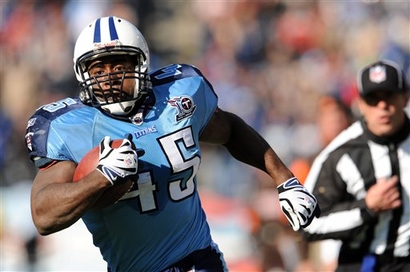 LenDale White (the real Smash) wants both he and Crazy Legs to reach 1,000 yards, and that has nothing to do with the fact that he's languishing at 674 yards on the year... nothing at all... totally unconnected events that just pass in the night and have no effect on each other... yup!  We still love ya' big boy!

If Rob Bironas wants a log-term deal, then he better get a long-term deal... see, being a GM is easy.

Jim Wyatt updates us on the final tallies from the fan voting in the Pro Bowl.  I believe the rosters for each conference will be announced in the middle of next week, so I hope you did your part to help our fellas get a swank vacation and some much deserved publicity.

Unfortunately-located commenter TitanFaninKnoxville (just kidding ya) passes along this great link to Lil Wayne's latest ESPN blog entry.  Lil Wayne lets us in on just how nasty it can get at the bottom of a pile against a terrible - and thusly frustrated - opponent:

Shout out to Dwayne Bowe and LenDale White again for hollering at me this week. Also, to Chris Johnson. We talked last week and he told me something very interesting: the Browns pulled out five of his dreads when he was at the bottom of the pile! They should be ashamed of themselves for that. I know how hard it is to pull out a dread, so you know that was part of their scheme. On the whiteboard in that locker room was "Pull out his dreads." That was their game plan. There's just no other explanation.

Piggy backing yesterday's Tennessean article, Paul Kuharsky talks with Titans left tackle Michael Roos about the need to improve his run blocking to the point where it matches his dominating pass protection.  I think if he did that guys like Dwight Freeney and Mario Williams would have to start avoiding the big Estonian tackle at all costs... as if they don't already.

I haven't been pimping this 'Bryan Pride' story, but apparently the offensive line's pet ball of tape has reached an astounding 138.2 pounds, and has earned a spot on the sideline for the playoffs.  I don't really know what to make of all of this, so I just choose to not dwell too deeply on it.

Since the Starcaps/Bumetanide scandal has popped Vickerson, along with a slew of other NFL players, it's an interesting footnote to the story that the lab which discovered the connection between the chemical with the pill-brand was here in Nashville.  Here's what the doctor who found the link had to say about the controversy:

"It took us a couple of Ph.Ds and a $300,000 piece of equipment to verify that Bumetanide was contained in StarCaps," he said. "How is somebody supposed to know buying it off the shelf or off the Internet what it really contains? We spent an enormous amount of resources trying to understand this product."

The Titans are still curshin' that Bendability index at CHFF, and we're a solid 4th in their Scorability index.

Rather than calling an exorcist and breaking-out the holy water, esteemed reader/commenter Hartley passes along this link pointing out that Kerry Collins is currently sitting at 666 career rushing yards!

Schadenfreude.  Merriam Webster defines it as: enjoyment obtained from the troubles of others.  I think it applies here quite well. (On a personal note I know a few good people here might think that's mean, so you can direct all angry comments and email to the MCM complaint department.  Your messages will be tagged as spam in the order they are received.)