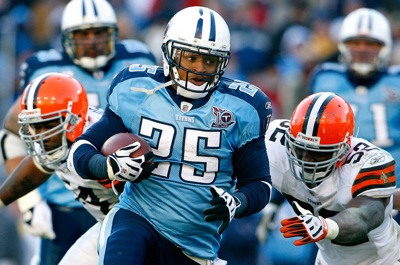 Day 3 of 'Smash and Dash-gate': it turns out that LenDale got the nickname trademarked and has the files to prove it... you're move Carolina!

LenDale also proposed an alternative nickname for the Carolina duo: Identity and Theft.  That's gold right there, and it further cements LenDale as the funniest Titan and this year's official quote machine.

Titans tackle Michael Roos has only given up one sack all year (to former Titan Antwan Odom, oddly enough).  If he doesn't start in the Pro Bowl then they need to start looking at the way offensive lineman are selected because the system will have earned an EPIC FAIL.

In sad news for those who love relentless domination, Boom King probably won't play Sunday, and as tricky as those groin injuries can be I wouldn't be surprised to see him out until the playoffs.  Since we've got things pretty well locked-up already I say that's the right thing to do because we need him bringing the full Boom in the post-season more so than these final few weeks.

Sunday's game will feature the best 2 rookie running backs in the AFC, and probably the NFL (apologies to Matt Forte).  Slaton broke off some long runs earlier in the year against the TItans, but look for Crazy Legs to be the one who gashes this week as the Texans D-line hasn't been the beastly collection their draft status says they should be by now.

Crazy Legs is up for FEDEX Ground Player of the Week and Diet Pepsi NFL Rookie of the Week again, so make sure you do your part and give the man some votes!

Studly reader Rustmeiester chimes in on his blog with some Titans-centric thoughts on this weeks match-up and a little sound advice for Crazy Legs:

Third, Chris Johnson's showboating. Chris, the next time you're running in for a touchdown, have the ball in the hand closest to the sideline. That way it'll be easier to resist the urge to hold the ball out to the defender who is trying to tackle you.

Astute reader/commenter Jasonkylebates sends along this fascinating read:  it's the resurrection of the Titans' glory as largely told by Donnie Nickey.

Sporting News gives some much deserved pub to DE Jacob Ford, yet another in the sizable line of Titans defensive lineman who seemed to appear from nowhere to terrorize QBs.  He's really carved out a niche as our pass rushing specialist and a vital spot in our rotation coming off the bench.

Has Paul Kuharsky been reading the SB blogs?  Here he goes a little deeper into the '4 TD passes against' stat Colts fans so love this week.