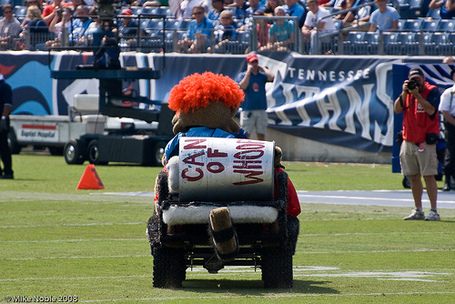 "I am a songwriter who has a little hobby, a second career," Collins joked by phone from his Brentwood home, during his only day off this week from football.

I guess being in Music City gives the Titans a leg-up when free agency roles around this off season!

Carolina is trying to steal the 'Smash and Dash' nickname.  It doesn't have the radio appeal of a song about someone stealing your woman, but I'd still like to hear Kerry write a ballad about it.

The Titans didn't get any of their last 3 games flexed for various reasons the Tennesseean doesn't bother to list here, but mainly it's because CBS wouldn't give-up the Steelers game (they can protect 1 game per week since flexed games go to NBC) and everyone expects the Colts to already have their playoff spot locked-up by the time we meet for the season finale.

In the most unsurprising news item of the week, Jeff Fisher polled the highest in ESPN's head coach approval ratings with 91%.  Also unsuprising, Tony Dungy came in second with 78% approval.

Paul Kuharsky makes a pretty solid argument that the Pittsburgh Steelers aren't anymore successful against good teams than our Titans, despite the league's observers clamoring to hold them up as grizzled vets ready for playoff battles:

This year's seventh round draft pick, CB Cary Williams, has been promoted to the active roster to fill the spot left by Kevin Vickerson.  Cary is a tall, rangey DB with loads of potential, and it'd be nice if he could model himself after another seventh round CB on the roster who is probably headed to Honolulu...

Brett Cervenka of houstontexans.com scouts the Titans, and sticks to the nitty gritty.

Bucky Brooks is among the many who are already etching Matt Ryan's name on the ROY trophy. Could some late season heroics from Crazy Legs change their minds?  I'd love to see him try!

It ain't just Houstonians hoping we slip-up against the Texans: Ravens fans hope that a loss this week would keep the Steelers game the following week relevant, thus helping their chances of winning the division should we knock-off the boys from Pitt.

I swear I'm going to start a sporadic blog just to track people who insanely think Tim Tebow is going in the first round, or to be a good NFL QB.  It ain't happening folks.