Week 13 in the NFL: The Jets Crash Back to Earth

Share All sharing options for: Week 13 in the NFL: The Jets Crash Back to Earth 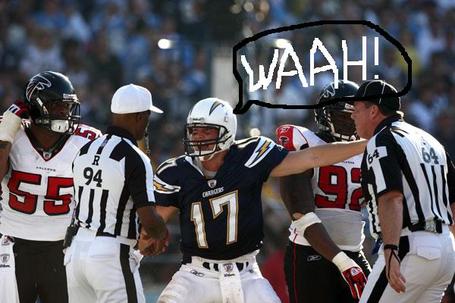 Here are some thoughts about what happened around the NFL this weekend:

The Colts got another ugly win, but as Shake said, a win is a win.  I would like to thank them for giving the Titans's defense the opportunity to tee off on Ken Dorsey this weekend.  The Colts could end up with the 5 seed in the AFC because they have a weak schedule down the stretch (Cincinnati, Detroit, @ Jacksonville, and Tennesee in a game that might not mean anything to the Titans).

The Giants are rolling.  The Plaxico Burress thing could serve as a distraction, not because of Burress so much because they are probably better off without him, but because their starting middle linebacker, Antonio Pierce, apparently tried to help him get rid of the gun.  There is something like a 3 1/2 year mandatory sentence for unlawful possession in New York, and that is why Pierce was trying to help him out.  Pierce might face criminal charges for his role in the whole deal.

3 Questions about this one:

The Steelers are really good.  It is going to be quite a game when they come to LP Field week 16.  It is always fun to see the Patriots get thumped.  How much, if any, does this hurt Matt Cassel's free agent value?

The Jets are a good football team, but that should end the they are the best in the AFC talk.  Everyone dismissed the Titans last week for getting beaten so badly at home.  It will be interesting to see if those same people will dismiss the Jets for the same reason.

Jaguars @ Texans tonight is a match-up of two teams that give the Chargers a run for their money in the most disappointing team race.