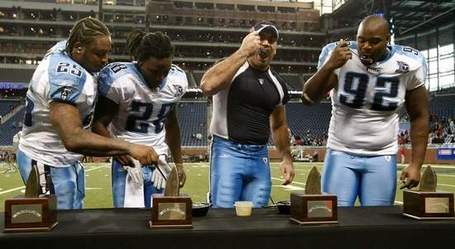 Gary Estwick details the long road Titan CB Nick Harper took to the NFL after stops in division II Fort Valley, the CFL and a Subaru nicknamed 'Doo Doo Brown' (named for this super-awesome 1991 rap song, which contains one of the best old school breakbeats/bridges you'll ever hear starting at about 1:50).

One more win, and we clinch the Titans' first AFC South Division crown since 2002.

I'd like to thank the Colts for making that task much easier by injuring Derek Anderson's knee, meaning we'll be facing for Miami Hurricane legend and perennial NFL 3rd stringer Ken Doresy.

Apparently VY refused to speak to the Nashville media after the Lions game, but did speak to a reporter from Westwood One.  That's not going to win VY any supporters and makes him look like a baby.

William C. Rhoden wrote a very good feature on Vince Young last week, and ends it with  a good observation when you piggy back this comment with a list of the most recent first round QB draft success like Cutler, Rivers, Flacco and Ryan:

Young’s benching is the end, for now at least, of new-age quarterbacks on the brink of redefining of the quarterback position. With Michael Vick behind bars, Young on the bench and Donovan McNabb morphed more or less into a pocket passer, the league’s quarterback pool has reverted to the statue-like signal-callers who hang tough in the pocket, protected by rules designed to keeping defensive linemen and linebackers at bay.

PFW says the comments LenDale made last week were indeed as quickly squshed as the report made it seem, and there's no doubt the big man will get another healthy dose of work against an awful Browns team this week.

AOL Fanhouse driveler Will Brinson brings us some video of LenDale White using some salty language during the Lions game, giving an army of slightly racist commenters the ammo they need to start with the whining.

Scout.com with Foxsports.com on MSN (high-fives for corporate synergy!) breaksdown how ugly of a mismatch we're going to see Sunday. You can definitely blame the Browns skuckiness for why this game didn't get flexed to primetime.