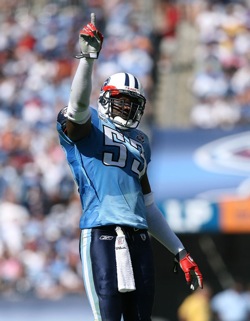 Between the Titans' devastating front line and their young, talented secondary there lies another beast that covers for both of their mistakes: the linebackers.

As the Titans' scheme has leaned more towards zone coveages this year the attacking style of the linebackers we've seen in the past has given way to more read and react plays. This may mean less big plays from this unit, but it also means they're keeping guys in front of them and focusing more on being in better position.

The linebacking group is also the only position grouping that has seen a performance-based line-up change. Ryan Fowler may have seemed blind sided by his demotion in favor of the speedier Tulloch, but everyone knew that when Tully was drafted 3 years ago it wasn't as a long term back up. He was too gifted athleteically and too productive at NC State to not earn a shot to crack the starting line-up.

How has he done with his opportunity? Read on and see...

Keith Bulluck is the leader of this group, this defense and in many ways the entire Titans team. He's played more games as a Titan than anyone since the move to Nashville, and he's captain without question every year. Bulluck has seen his tackle numbers drop ever since David Thorton joined the team, but that's largely because he's not being asked to do everything anymore. Bulluck's sack numbers are down, but so are the entire units'; this is a testament to how little Schwartz has used the linebackers as blitzing pass rushers, opting instead to drop them in zone and let the front 4 collapse the pocket. Still, we'd like to see a few INTs from Mr. Monday Night.

Follow us through the jump for grades on the rest of the starters...

David Thronton joined the Titans in 2006, and his impact has been felt ever since. Patrolling the strong side of the defense, Thornton has been a beast against the run and the pass since the day he put on the two-toned blue and this year has been no exception. LIke Bulluck, his numbers are down more so from a lack of opportunity than a lack of execution, but he's delivered big hits and blown-up several plays behind the line of scrimmage this year. Thronton is also like Bulluck in that we could stand to see some INTs from a crew that has taken on so many more pass coverage responsibilities.

Tulloch took over the MLB spot from Ryan Fowler in week 4, and he's been flying from sideline to sideline ever since. His athleticism has solidified the Titans linebackers group as the fastest and rangiest to ever line-up on the banks of the Cumberland.

While he will still struggle with centers and guards who get him at the second level when run blocking, Tulloch has shown a knack for taking great angles which result in laying big-time wood on running backs. He's been beat-up and burned a few times in the deep-middle coverage responsibilities that come with our cover 2 and cover 3 schemes, but that's going to happen to even the best MLBs sometimes in a zone-heavy scheme. Tully has been an upgrade over Fowler and continues to improve, as witnessed by the big 3rd down stop against the Colts. His versatility is also a huge boost: Tully took over Bulluck's outside linebacker spot when the captain went down against the Packers, and he may start there if Bulluck can't go against the Colts.

Grade: B- (but improving)