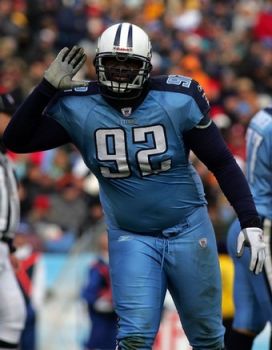 Haynesworth is the best defensive tackle in football. He disrupts the middle of any offensive line he faces and keeps the interior lineman from getting to the second level to block the linebackers. Fat Albert will probably become the highest paid defensive player in the league this offseason. I just hope it is the Titans that are writing his checks next season. Grade A.

KVB was playing awesome like he always does until he was slowed by a groin injury. The box above says he has played in 6 games, but 2 of those 6 were for about 1 series, and the injury initially occured in the first half of the Ravens game. The Boom King recorded 3 sacks in less than 4 games. He was on pace to have another Pro Bowl season. Hopefully he will be back to 100% soon. Grade INC due to injury.

Brown appears to be the most improved player on this defensive line. Last year when Fat Albert was out Brown looked like he didn't belong on an NFL roster. He has held his own in there this season even when Albert has been out, and he has made some big plays. He has 3.5 sacks in 7 games after having just 4 sacks last season. Grade A.

Kearse has been about what I expected. He is the player that he once was, but he can still make some plays. The most impressive part is that he has stayed healthy. (No idea why the stat box above has him at just 7 games) It would be nice to see him step up and make some plays in KVB's absense. Grade C.

Jones has been quite impressive this season. He filled in well for Brown the game he was out and played threw an elbow injury. Jones is going to be an asset for this team for years to come. Grade A.

The rest of the Titans defensive line, Jacob Ford, Dave Ball, William Hayes and Kevin Vickerson have all played pretty well when called upon. Ford has been the best of the bunch coming up with 2 sacks and a forced fumble last week against Green Bay. Ball has even chipped in 1.5 sacks. Grade B.

The defensive line is very important in the scheme that the Titans run, and this unit has been really good so far combining for 19 sacks in 8 games. Grade A.