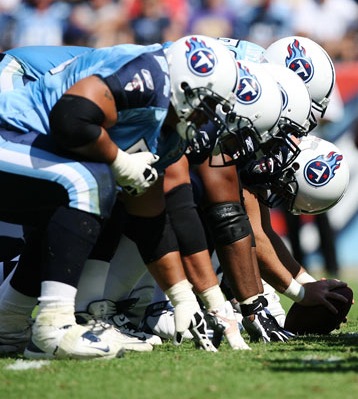 How good has the Tennessee Titans offensive line unit been over the first half of 2008? It's no stretch to say they've played at this level.

I put Kerry Collins' stats up there to point out this: 210 times Kerry has dropped back to pass, and he's only been sacked on 3 of them. Simply put, for a QB who was sacked 305 times in 14 years (21.8 times per year), that stat doesn't change without a little help from the big uglies up front. It's a good illustration of just how dominant this line, already renowned for it's run blocking, has been in the passing game as well this year.

Oh yeah, they also pave the way for the AFC's leading rusher and the NFL leader in touchdowns.

Kevin Mawae is having the best year I can ever remember him playing. I was a big fan of Mawae's during his Pro Bowl filled tenure with the Jets, but he really seemed to fall off last year. He would get bull rushed back into the pocket, which forced Vince to bail, and struggled getting to the second level. For whatever reason, though I get the suspicion Dinger's blocking schemes have helped, Mawae has been a beast this year. He's the spokesman for one of the best all around units in the league and a clear leader in the locker room. I think it's safe to say that Mawae's grit and veteran smarts have never benefited the entire offense more than this year.

Tackles Michael Roos and David Stewart came to the team in the same 2005 draft, and they're turning the corner to being widely regarded among the best tackle tandems in the league at the same time as well. Both men have been consistent bullies in the run and pass game regardless of the competition. Roos has refined his footwork, and he's playing from a more stable base and lower than I've ever seen him consistently do before. Stewart, known in the locker room as Big Country, is regularly compared to Jon Runyan, and he lives up to the company. Stewart brutalizes defenders at the first and second level on the regular. He will require help from the tight end with elite speed rushers, but he held his own against the troublesome Colts DEs all night on MNF.

Guards Eugene Amano and Jake Scott were the wildcards on this line coming into the year. Any fears of a drop-off or transition period were quickly cast aside though. Amano usually shows absurd strength driving defenders on run blocks even if he does get popped backwards sometimes. Last year when he filled in Amano would struggle with larger DTs, but I haven't seen any evidence of that this year. Colts defector Jake Scott has been better than advertised. Like everyone else on this line, he's smart and rarely turns the wrong way, but I think Scott is the best pulling guard we've had in a while. That makes sense because the Colts really value mobility in their interior lineman.

I'm including fullback Ahmard Hall in this grouping because he's primarily a blocker, that's certainly his forté and not at all because I completely spaced on mentioning one of my favorite Titans in the running backs post yesterday. It seems like at least once a game Hall lays a big block... the kind that get defenders fired the next day. He only has 6 attempts for 19 yards this year, but Hall's military work ethic and lead-by-example mentality have been giving linebackers’ and cornerbacks’ nightmares all year.

So, when any offensive line has a running back duo productive, and a pocket passer QB who gets that much time, how could you give them anything less than an A?